Getting a Grasp of Clermont

The layout try to model an almost mythical train from our childhood: CN #522/523. To make it the real mirror of what we witnessed, we have to both represent what moves it did and which customers it served to have this characteristic look. Coupling various cars doesn't make the cut if they can't tell a coherent story.

To retrace that story, timetables and official paperworks are instrumental in understanding the place, its activities and customers from the railway perspective. Until recently, we didn't have such paperwork and worked from distant memories, hearsay and very rare pictures of that area at that specific time. Most of the time, we couldn't do better than interpolate what seemed to be plausible.


No wonder why until now, the diminutive Clermont yard wasn't up to the task. To be honest, it was always a no man's land hard to define... In fact, back in April 2014, it was this particular side of the peninsula that sparked the whole layout reboot as a prototypical representation of Murray Bay Subdivision. We knew the track plan, but not the specific purpose.

Imagine when we discovered Clermont's industrial district - while located in a very rural and backwood location - was home to about 7 specific industries and one multipurpose team track. Four customers were all oil or gas dealers including Superior Propane, Texaco and a Petro-Canada subsidiary.

From that moment, we were able to understand why we saw regularly "weird" cars lost among long strings of CN 50ft boxcars in the 80s. They were the spices of the railway and now, we know their exact purpose.

With these new facts, it's hard to say we are doing a good job at reproducing Murray Bay Subdivision if we can't incorporate these new defining elements into the layout concept.

The funny thing is this time we aren't finding a location that fits our needs but rather, we recreate a semi-fictious location that support the real train operation. As you already know, it's impossible to model a correct rendition of Clermont, thus we choose to do a protofreelanced combinaison of 3 locations: Clermont yard, Clermont Industrial Park (wye) and Wieland.

As crazy as it may sounds, this fantasy place is a closer tribute to Clermont than trying to reproduce clumsily a specific scene (which we failed countless time). In that regard, I remember when Mike Cougill tried to cram too much stuff on his O scale switching layout to fit his vision only to find out the best bet was to keep thing smaller, maybe less prototypical but nearer to the sense of the place.

In that respect, my memories of Clermont are of relatively rundown industrial short sidings along non-descript industries built on Road 138. The most representative place is Wieland, were many moves were actually performed by the crew. There was a passing track, a team track and a small industrial track. It was also the place were MoW cars would be stored and dump cars loaded with rocks and ballast.

Wieland is compact yet full of "industries" without looking crowded: exactly what we need. The fact it is considered almost like a terminus is also a good point. This area feels like you are truly reaching the end of  the line: a goal. This sense of purpose is extremely important because until now, our trains were bound to nowhere and ending in a private property.


Now, does all these neat concepts can be translated on the layout? Yes.

The good thing is that many industrial sidings in Clermont are very short, averaging only a few hundred feet (about 36 to 42 inches long in HO). They fit perfectly our tight peninsula geometry.

According to the upgraded track arrangement, we only need to add another siding between the main and the fascia. I know I'm always advocating against adding too much tracks, but when they have real purpose (not merely by fear of lacking operation interest), it's totally acceptable.

We already made a real life mock up of the new track arrangement and it looks good. Having four parallel tracks really makes Clermont a believeable small yard. The siding near the fascia is the team track. It handles a lot of commodities including lumber, aluminium cables, sand, ballast and many others. The siding on the hill side is dedicated to Superior Propane. The actual space is enough to replicate this industry full size without looking cramped.

Here's a general view of the mockup area: 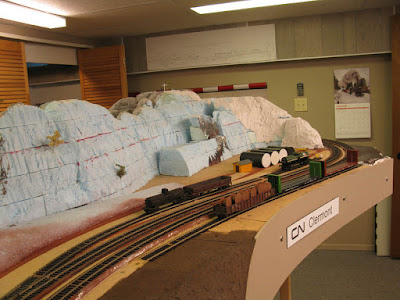 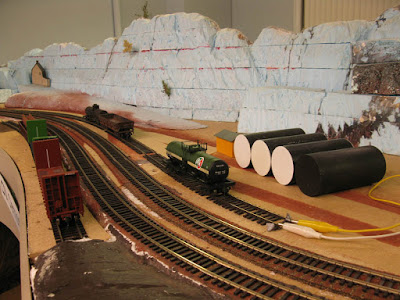 It does share a certain ressemblance to the real Clermont yard near Donohue: 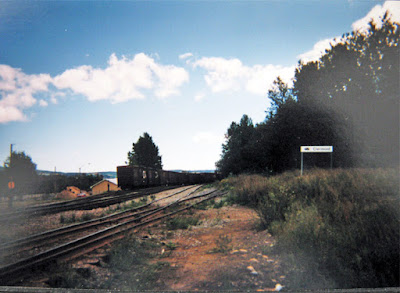 We added a speeder shed at the yard's eastern end for fun. It won't be the definite structure, but it makes it clear a building is required to bring a sense of closure to this scene. With the gray and green house on the hill, it enhances depth. 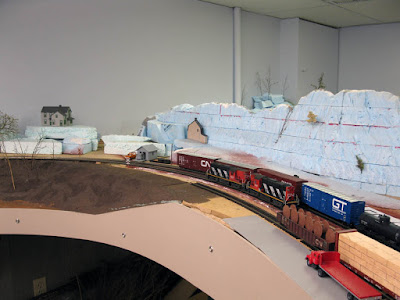 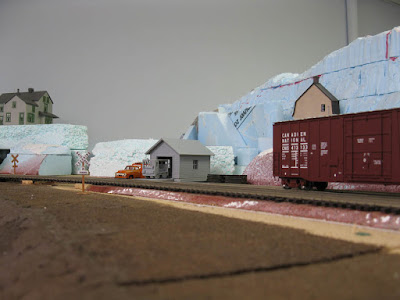 Finally, I consider this last picture as the one that show the true potential of Clermont. While it is a peninsula, the foreground scene blend together with the Malbaie River bridge in the background as if it was one large and deep scene. It reminds me the concept of "Shakkei" or "Borrowed" scenery that Rob Clark discussed in his December 2015 Model Railroad Hobbyist's Imagineering column. 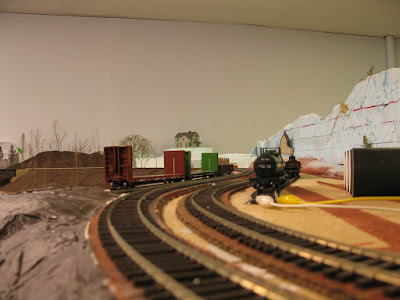 With that last scene complete, I can say we have probably nailed the track plan once for all. I'm looking forward to build this new scene and scenic it accordingly.
Posted by Matthieu Lachance at 5:00 AM