Summer is ending and students are back to school, but there's still some time left to publish another article under the Thinking Out Loud series, this time about S scale.

No, I'm not going nut or changing my mind! But I suspect Simon Dunkley won't be surprised by this post. It seems he foresaw everything!

When I saw S scale in real last Saturday at Exporail, my first impression was a mix of: "yes, it takes less space than I thought" and "wow, look at that presence and level of detail"... in common language it would translate as "HO scale as it should have been". Add the discussion with Trevor about "one town is OK" and I was bound to at least try a few ideas on paper, particularly QRL&PCo which used small locomotives which are hard make reliable performers with sound, keep alive and weight in HO. To be noted, Sunday I was already exploring a few options.

Dominion Textile at Montmorency Falls would be ideal in term of traffic and operation. It was the number 1 railfanning spot on QRL&PCo in Omer Lavallée's days. You could spot various CNR steamers, electric steeple cabs and interurban cars pulling passenger and freight manifests.


On our club layout, we already model the area just before Dominion Textile's closure. However, this prototype needs a substantial amount of place along a wall. Not impossible in S scale, but the factory itself would take up to 14 feet without compression. Sure it could be compressed, but because Montmorency Falls was a terminal for many trains, had a car repair shop and was the transition from single to double track mainline, the track arrangement is relativement comple. We need to implement a fair amount of curvature to make the scene entirely. In a perfect world (if my basement wasn't that much damp), I could have up to 32 feet along a wall to make this scene possible. 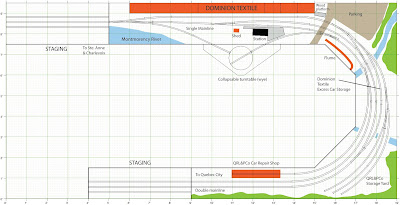 While continuous run isn't possible, two 5 to 6 feet long staging area can be set in place to generate traffic and destinations. Most operation on the layout will involve switching the huge Dominion Textile and shuffling car between the car shop and storage tracks. A collapsable turntable could be implemented to turn interurban passenger cars returning to Quebec City with tourists. It seems to me this track plan require a lot of turnout for semi-limited operating potential.

Beaupré used to be Côte-de-Beaupré's industrial heart from 1927 to the mid-2000s when the paper mill closed down. While modelling the mill wouldn't be feasible nor very interesting from a QRL&PCo point of view, the other side of the town could be reproduced in S scale without compression and including the 4-span steel bridge over Ste. Anne River. I once designed and started to build a small switching layout based on that premise.


Beaupré was a very simple town with a team track, a passenger station and a freight shed. There was no passing track, but the setting with the station within 30 feet from the river was very scenic. The main attraction was the Leaside Engineering Munitions plant in business during the First World War. Later, it was converted as an industrial alcohol distillery during WW2. The alcohol was used in the manufacturing process of rubber. After the war, the Montmorency Distillery Ltd. converted to producing rye whiskey aka Canadian whiskey. They would later be a part of the Seagram empire. They made the Dominion Ten whiskey-rye that achieved an enviable reputation on Canadian market back then and which featured Montmorency Falls in its advertisement (most of their posters featured famous natural Canadian landscape). To age the whiskey over a long period of time, a large multi-storey brick warehouse was built. A smaller brick warehouse and several grain silos existed along the track. So far, photographic evidences of Montmorency Distillery is scarce. 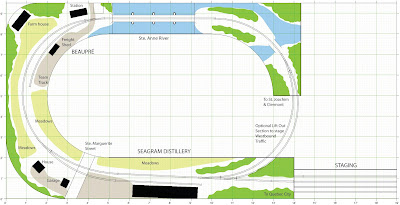 The big problem with Beaupré is asking if the layout could be entertaining in the long run. I could add a passing track to make trains meet there, but that wouldn't mean that much for a single operator. On the other hand, I know well that very little trackage is required to sustain a 1 hour operation session. In fact, I know myself and "wasting" time switching at low speed in a nice little scene is one of my favourite aspect of operation.

Industry-wise, the distillery received various grains, coal, wood barrels and other supplies while it shipped bottled whiskey. The team track was your typical agricultural setup accepting and shipping anything. As for scenery, I already know a full-scale rendition of Ste. Anne River would yield tremendous appeal. It was a favorite spot of mine during my high school days and any train crossing it looks good. I remember purchasing 4 Central Valley bridges back then... The continuous running is also a nice feature and having a centralized staging area is good too. The passing track located east of the bridge (which exist in real life) would be perfect to operate two trains at once.

Truth to be told, the Beaupré scene is much more in line with my perception of Côte-de-Beaupré railroading: large rivers, small rural communities, one-storey high brick warehouses... meadows, lots of meadows because it's not the "Coast of Beautiful Meadows" for nothing! A big plus is the fact the two houses are typical 18th and 19th century French Canadian houses. If you want to convey the fact you are in the St. Lawrence valley, there's no easier way than have this kind of building featured.


This layout could be something like a large diorama, but when I think about it twice, the 7-car spots distillery is exactly in line with what Lance Mindheim like to say about small switching layout. It must no be forgotten the fact the huge amount of scenery (without compression) will give the impression of a train travelling across countryside for REAL.

This is my hometown. I made some plans in my high school days of our local saw mill and its single siding. This is very minimalist, but with the nearby river and rural grade crossing, it would make a very interesting diorama or module. The scene could be modelled without compression on three 4 feet modules. Before going crazy over some new scale, trying a module could be a good idea, particularly since I never handbuilt turnouts.

I already presented Baie-Saint-Paul in a previous post. Similar in fashion to Beaupré, it had a 2-span steel bridge over Rivière du Gouffre. This time, the customers were well defined at the team track and extensive unloading equipment was located there. Without a doubt, it would be a nice "diorama" layout, but to be honest, this scene would shine better as a module and the space I have hardly do justice to the prototype.

It means simply compressing the actual track plan I devised. As for any Temiscouata-themed plans I made, I will have to decide on an era because Connors' trackage changed over the year. In the best world, I would need to use a full lenght wall to make something decent. Once again, space is at premium and some serious mockups should be built before committing myself to anything. That will be the case with the other propositions...

Another nice turn of the century layout could be set on Canadian Northern Quebec Railway mainline between Montreal and Quebec City in the 1910s. The ex-Great Northern of Canada Railway line was home of a large paper mill located in Donnacona. According to old pictures, the plant was partially operating on steam and received large amount of coal. Pulpwood, chemicals and newsprint were also common sight in the area. Just a few hundred feets from the plant was the CNoR Donnacona station. Also, a railway overpass was located near the plant to access the pulpwood yard. Several intricate pipes found their ways around there.

A interesting fact is the mainline was crossing the mill property before spanning a river. It means staged trains would come out from behind plant, making it an effective device. Another great aspect of this layout is the fact the backdrop would be St. Lawrence River and the South shore. I've seen someone modelling this scene in HO many years ago (unfortunately I don't recall his name and don't want to publish his pictures without his consent) and it works great. This is also a good occasion to bring justice to CNoR and use a lot of Canadian fallen flags' cars.

Finally, the most realistic approach would be two build a set of modules and try my hand with this scale before committing myself to something I do know if I'll like.

I recently discovered a very neat little community called New Woodstock located on Lehigh Valley's Cortland Branch. The information comes from an old website by P. Lord who tried (and succeeded) reproducing his childhood memories of Lehigh Valley. His attention and methodical process to document and build correct structures for a very specific era is interesting (the New Woodstock module in particular).

The nice thing about that locality is a dense core of industries is located right behind the passenger depot which means the scene is already compressed making it a nice prototype of a typical agricultural community. I think this neat prototype could benefit from a suitable 3D mockup to test up the concept. I remember an issue of MRH a few years ago featuring some guy making hyper-realistic rural community scenes without any compression. I was never able to find the article again, but it was very impressive.

Everything I said must not be taken at face value. These are layout ideas that surface from time to time in my mind and which I revisit accordingly. I just wanted to see if they could be implemented in a larger scale while keeping their appeal. Generally speaking, I suspect most of them do.

As a matter of fact, I think both Beaupré and Donnacona have huge potential as layouts that can "submerge" you into a scene. The same apply to New Woodstock. I've often noted that when I was switching such scenes, I tended to be calmer and take time to make every little moves required. When the trackage is complex, I have a habit to skip many of them. As for Temiscouata, I feel my available space would drive me to set on the later simtrack plan since it fits better.

One thing that must be noted is S scale is a "railfan" scale because the trains and scenic elements have a presence of themselves, much more than HO. Each time I bought a small HO steamer, I was mesmerized by its minuscule appearance. It doesn't happen in S scale and this is a plus when modelling older era with smaller equipment. I understand perfectly why many 19th century modellers prefer O scale when building their 4-4-0. That's the only way to do them justice.

If I ever choose the S scale route, I'll have to learn a new skill: track laying and handlaying turnouts. It could be a useful skill to develop in the future, I must agree.

Another aspect I like about that scale is how building structures is easier. Building intricate details on a HO scale passenger station can be nerve breaking. A lot of hardly discernable efforts from a normal viewing distance. Also, cross section of building parts are bigger, thus easier to shape.

Posted by Matthieu Lachance at 12:03 AM

Email ThisBlogThis!Share to TwitterShare to FacebookShare to Pinterest
Labels: Thinking Out Loud, Thoughts about Model Railroading