Another round of painting ties and ballasting in Villeneuve yesterday. While reassessing the tie color, I decided to add another coat of grayish-brown oil wash over the mainline ties to make them stand out a little bit more.

I've found oil paints to be extremely forgiving for this task because you can build up the color in several layers and they are extremely good into adding texture and color variation to the ties. The long drying time is also welcome since you can touch up your work as required during the session. They blend seamlessly together, bringing up a level of realism you could only surpass using real wood ties (which I reserve for the Connors layout in the future).

But in fact, oil paints induce something we rarely care about: they force you to wait between coatings so you can take your time moving toward your goal instead of slapping paint mindlessly in a short time. The extra waiting days give you the opportunity to revisit what you've done, reassess the results and take any steps required to bring more life into your model. 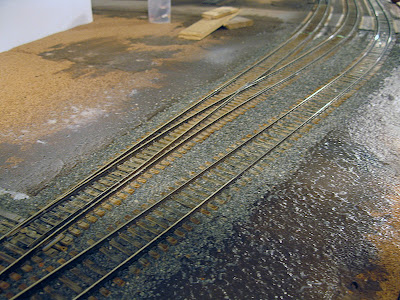 I also started to ballast the mainline and yet again decided to learn from my past mistakes. I generally follow Mike Confalone's techniques of using sifted limestone and added spots of sand and dirt. While it gave decent results, it wasn't an homogeneous blend and the ballast was quite dusty making the ties looking milky. I certainly don't use the same mineral as Mike and ballasting is a very personal approach. To each his own. My variation on his technique was quite good for neglected spur and sidings, but certainly not suitable on mainline track. It was time to look at the prototype with fresh eyes and try something else.


I took my three ingredients and sifted them down the wanted size in separate containers. Then, using a very fine sift, I removed the dust and only kept the gravel. The blend was then mixed according to prototype pictures to get the gray-beige peppered look that was usual on Murray Bay subdivision back then in the late 1980s and 1990s.

The proportion are roughly:

The new blend gives quite good results and the it no longer looks patchy. The stretch of track west of Sous-bois Avenue is done but I blended enough ballast to do the entire mainline up to d'Estimauville Avenue next time.

Meanwhile, Jérôme and I took a step back to asset the layout. We believe Villeneuve should be completed within 18 months if we keep our pace. But this is not a schedule but just a general idea of where we are going. Building a layout isn't a race and it will take the time it needs.
Posted by Matthieu Lachance at 8:33 AM