The history of Murray Bay Subdivision cannot be understood without taking in account the ingrate topography that plagued (and still does) the line from its inception in the late 19th century up to its modern incarnation as a touristic line.

While the original and first segment of the line from Quebec City to St. Joachim ran on a virtually water level route devoid of any striking features, the same couldn't be said about the second segment linking St. Joachim to Clermont. This part of the line, originally planned on Quebec Montmorency & Charlevoix Railway original charter was never built by this company. Only under tremendous pressure by notable politician and businessman Rodolphe Forget did the Charlevoix section was built using mainly government funding. The reason was simple, you had to build several dozen of miles of track on the north shore of St. Lawrence River. Most of the time, no room was available for the track and a new embankment had to be built. Coupled with a fairly sparse population, the line would be costly to build and maintain while raking very little profit. No wonder QM&C never pursued this pipe dream and stayed a profitable enterprise for about 70 years.

On the other hand, it must be stressed this line extension helped to industrialize the area and open it to North American markets and tourism. In the long run, it was a positive force even if nominally profitable. Until the paper and lumber economic slum, CFC was in good shape and a financially interesting short line.

However, to keep the infrastructure up and running, a huge amount of maintenance was required to consolidate embankments every year. Rock slides and washouts were common and had to be dealt with swiftly. Just to give you an example, a similar line was built on the north shore a few miles west of Quebec for Canadian Northern Railway near Cap-Rouge and St-Augustin-de-Desmaures. When CNoR went bankrupt, the line was abandoned and most embankments were washed away by the St. Lawrence River tides. Given railroads are notorious for scaring the landscape on time scale well over a century, you can no longer see that line on satellite imagery.

For this reason, CN and CFC used to have several hoppers and side dump gondolas full of ballast and rock. It was a common to see a freight consist pulling several hoppers, stopping somewhere in Charlevoix and dumping the content here and there to consolidate the roadbed. Most cars were old CN 40ft triple bay hoppers but CN orange ballast cars were also common in CFC days.

When visiting Van Horne Hobby in late March, I had the chance to find a Walthers Ballast Hopper 3-pack in Conrail scheme. I already had Highball Graphic decals to letter CN cars so it was an instant buy. Funnily enough, while these cars are a little bit old and have molded on details, I found them to be fine enough to be kept. My first idea was to replace them with wire grab irons, but on second thought, I decided to save myself the trouble doing so. While I expect my cars to have a decent level of detail, I must admit my hobby time is shrinking at a fast speed and I can't afford to detail each model as if I was shooting to win a contest. Yes, if I could I would do otherwise, but I decided I would rather put efforts on an excellent weathering job than painstakingly replacing every grab irons. At some point, I have to recognize correct coloration and texture is crucial on making a model realistic, much more than minute details. In this respect, I must agree with Lance Mindheim's recent observation on N scale rolling stock about developing a strategy to meet your goal. On other more focussed projects like Quebec South Shore Railway and Harlem Station, I'm more eager to commit myself to higher modelling standards.

As you can understand, the project was then quite straightforward. For the first time, I used an air eraser to remove unwanted lettering. Working with baking soda can be tricky due to humidity, but it certainly expedited the process while not having to work with chemicals. 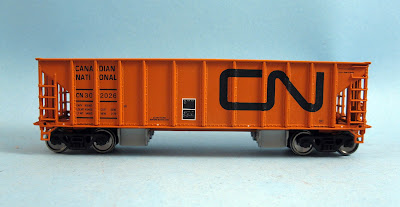 Paint was a custom mix of orange, white and yellow. My goal wasn't to replicate a perfect CN orange color, but rather to get closer to the color seen in real life, which aged and faded over the year. Another filtering coat will be applied when decals will be completely sealed.

On a side note, I must note I hate to decal ribbed cars in CN wet noodle scheme. The reason is quite simple. Most decal manufacturers make their design using the standard wet noodle, but they don't take into account the rib height. If you apply the decal directly on the model, you end up with a smashed logo. 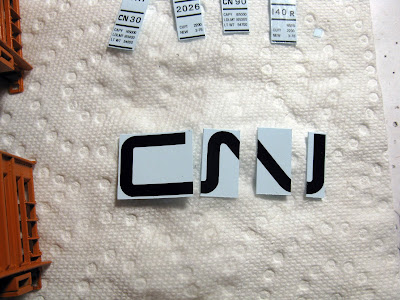 The trick is simple, you cut the logo in different parts, generally the same number of panels covered in artwork. It leaves blank spaces on the rib sides which can be easily touched up with appropriate color paint. Once sealed, it is impossible to see the difference and it dramatically improve the appearance of the model. 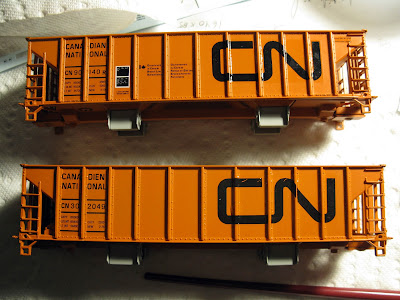 After looking at various military model weathering techniques, I decided to try my hand on one hopper. While far to be perfect, I certainly liked how their techniques are easier and less messy, basically giving you much more control on what you are doing. I still have a long way to go and this car's weathering isn't complete yet, but it was an interesting starting point. I hope to master the methods a little bit more when I'll do the next two cars. 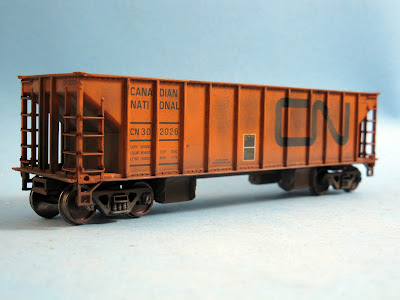 Another striking point was how these guys weather their model quite a bit before applying decals then blending them with their surrounding. To me, it makes much more sense and I often wondered with model railroaders gave themselves so much trouble. Think about it, nobody except our weird crowd would completely build a model, paint it, decal it and weather it. It seems our hobby is obsessed by weird ways inherited back in the days. I see two possible explanations: it was the way of doing model (particularly less detailed one) in the early foundation of this hobby or we have a very pragmatic way to do things: we built, we paint, we weather. Some will say we follow exactly the sequence in the 1:1 world, but I feel we give ourselves a lot of trouble. Just think how easier our lives would be if we pre-weathered models before decaling. Modulating and filtering the color would be particularly easy. And given white lettering on freight cars rarely weather the same way the surrounding color, it would make our lives much more easier will improving tremendously the finished model. 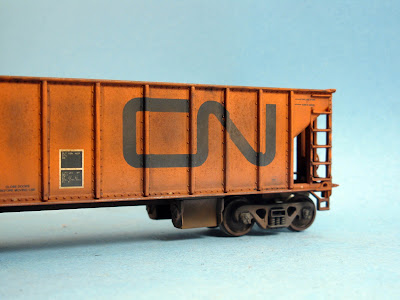 I must admit I'm always puzzled to see how our hobby is stuck in the past. While some guys do amazing things, the mainstream modellers have very little knowledge about what other modellers do. It seems to me military guys (among many others) have this drive to innovate and push the limit while model railroaders a people of traditions. Is it a bad thing? Well... probably. It is probably one of these roadblocks that keep us eternally at the kids table. Why is it our printed and online press always repeats the same old stuff under the pretense of helping newcomers? Are we still teaching to type on old typewriters for the sake of sparing new generations from a overwhelming electronic world? Is is normal every month, I look at available magazines and find out they publish exactly the same stuff from the 60s, 70s and 80s? Seriously, sometimes I ask myself if this hobby takes people for poor fellows unable to catch up with the era. Something akind to the proverbial man children living with his toys in his man cave. And don't get me wrong, I've got nothing against doing model railroading just for fun. But I find it disturbing to see the ones that should perfect and push forward the hobby keeping it under an umbrella in fear of I don't know why... Unfortunately, it isn't for lack of talent and ideas, which is a shame.
Posted by Matthieu Lachance at 8:07 PM