Blogging on Hedley Junction is never a linear path and for such reason, small breaks can occur here and there. Over the last few week, uniting the crew to work on the layout was quite hard due to conflicting schedule, health issues and other activities. However, it doesn't mean we did nothing during that long span of time.

Among the new stuff going on, we got 3 undecorated Rapido SW1200RS to repaint as CFQ units to faithfully operated the layout as it should have happened in the early 1990s. I hope to tackle this project during the summer as soon as I'll get suitable decals for it.

We also worked on Jérôme's St-Pie switching layout, assembling the benchwork but also starting to build a pair of Central Valley 150' truss bridges (which incidently are quite a challenge, though well worth the effort). This project is moving along sweetly and I certainly hope it will be up and running this summer. It has a very minimalist approach and I'm eager to see how it will turn out in real life.

Finally, I stumbled upon an old Erie layout based on the Dayton Branch. I explored this concept a few months ago, but it was fun to revisit my design once again with a fresh mind. It won't surprise anyone but I took yet another time a minimalist approach by trimming down a lot of stuff and only modelling "accurately" Erie interchange with DT&O at Maitland Junction, Springfield, OH. 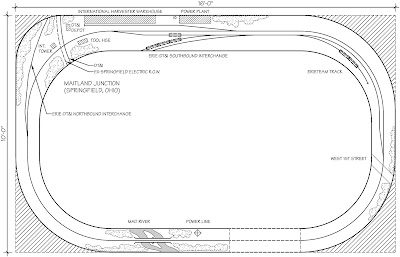 For the sake of operation interest and visual gimmicks I had tried to cram too much stuff. Now, I simply see the layout as a self-contained scene that can be operated like a regular switching layout centered about interchange operations. I kept scenery very low key with fields, ditches and small tree groves. The idea is to have less stuff but to model it well.

I also better located each key scenes so the can frame what happens. When entering the room, your eyes are automatically attracted by the railroad junction and it's high building density. Then, mundane decor can be seen for a few feet on each sides so one could contemplate a well executed photobackdrop representing sweeping vistas over Ohio fields. These vistas are then framed by small scenes with carefully located trees; one is a bridge over Mad River, the other one a small grade crossing.

The liftout section doesn't cost to much to add and can provide continuous running when desired. With 5 "industries" to switch from opposite directions, I'm not worried it will provide plenty of interest. The main goal being to run a local switcher as was the case in the late 1940s and early 1950s, I consider this layout to be more than enough for an average modeller that what to see the end of a project yet provide him with a nice setting for his train and interesting modelling challenges.

While this layout is quite low density, one shouldn't shy away thinking it will be easily done. Vegetation, subtle landforms, track, ballast and roads can provide a lot of challenge if one is determined to try his best at it. Also, the very few structures on the layout aren't generic ones. The Maitland tower was a beautiful example of Erie standard architecture and the large brick and concrete warehouse hard interesting rooflines, skylights and windows. All of these elements would require dedication to catch the prototype flavour. To be honest, when I think about this concept, I can't help but think about these beautiful British dioramas and small layouts where you can find a genuine dedication to replicating - and understanding - textures that make our surrounding.

I'm not even sure I will ever build this layout, but the exercise was well worth my time and I believe it has merit for many people who struggle with the unfocussed (or over focussed) basement filling trope. Not that I believe one type of layout is better than another. But I certainly think there are many ways to reach a similar goal. Frst in a village rather than second in Rome.
Posted by Matthieu Lachance at 12:18 PM