Strong from my previous experiment with color filters, I decided to see if I could improve an old late 90s Walthers CN Difco Dump Car. I must stress this car isn't prototypical even if it is quite close to a few cars CN owned. Most CN dump cars had completely different panel designs, larger cylinder and many of them were noticeably shorter. To add to the injury, the lettering has nothing to do with what was common on CN. Back then, Walthers used a very dark burgundy color instead of boxcar red for CN cars, which gave them a weird appearance. Fortunately, new releases have a more typical shade of brown and far more prototypical lettering.


In the past, I've weathered this car twice. It explains why the side panels are full of dents even if it doesn't make that much sense. But back when I was in high school, it was the best I could do. I also recall having painted small graffiti has seen on a car stored near my school.

Anyway, for the sake of this experiment, I decided to keep the wrong lettering and accept the car was a stand in. However, it was clear in my mind the wrong color - which is a major detriment - had to be addressed. To change the color, I sprayed the model with acrylic paint with a correct shade of brown. To get it right, I didn't rely on official colors, but rather mixed my own color following prototype pictures. It was evident these cars had badly faded paint and I wanted to replicate that particular look. 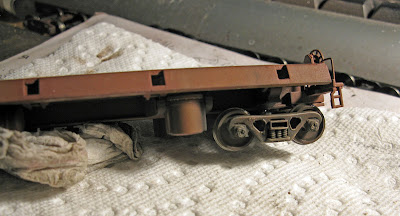 When the paint was dry enough to touch the model, I used a stiff paint brushed soaked in isopropyl alcohol and cleaned the lettering. It didn't take long to see the white shines again. From there, I used various shades of highly diluted oil paint to modulate the brown color. Raised parts were highlighter with light and warmer tones to make them pop and give the car so depth. The same was done on the air cylinders. 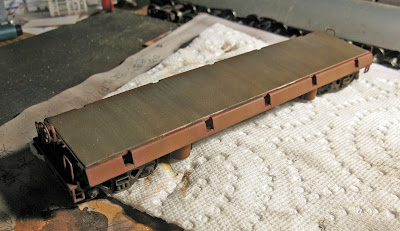 The car interior was weathered after I carefully studied Difco car videos on YouTube. Several people have posted online videos showing cars in action. When the load is completely dumped, it is easy to see the weathering patterns and how the steel is polished by the sliding loads. 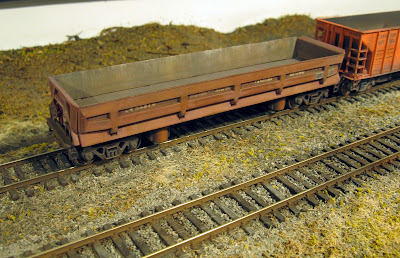 When dry, everything was clear coated and standard weathering techniques were used to dust the model. Finally, a last clear dull coat was applied but this time, I used a custom mix of 1 part Tamiya flat base and 3 parts Future acrylic floor finish. I like this mix because it create a chalked effect on the model that suits perfectly well fade paint.

At the end of the day, the model discrepancies aren't gone, but at least, it visually blends better with the rest of the fleet. Given this model is rarely used in operation, I'm not that much concerned about prototypicalness. If I ever want a better CN dump car, I'll simply scratchbuild one.
Posted by Matthieu Lachance at 1:14 PM