If Villeneuve was Beaupré... Maybe Not!

Prologue: Sometimes it is good  to know when to move forward and change things, but it is also as good to design things, mock them up then realize their true potential or absence of... Many ideas are good on paper, but hardly survive a reality check. Beaupré is an interesting concept that I'm sure could work nicely, but here is the tale why I wouldn't push forward with this scheme at this point.

As the layout concept coalesces around Chemin de fer Charlevoix's tenure of Murray Bay Subdivision, a lot of questions arise. One of them, after analyzing in detail train movements is about the selection of locations. To be honest, it is not an easy task and I'm not alone in the boat.

Clermont has been taken care of and I won't go back. I'm satisfied of having taken the decision to scrap impressive scenery for the sake of coherence. Some stuff will have to be decided on the benchwork in regard to fine tuning the track plan, but so far, it works well and makes sense. A single location for a room seems to be a reasonable choice.


You won't be surprised to know I tried to apply the same logic to Villeneuve. I do love the scene, it has a very railroady feel with the yard and the large cement plant, but I wanted to know if things could be more interesting if I modelled Beaupré instead. Thus came this idea I described in previous blog post about having a layout fully dedicated to newsprint traffic.


One of the key point of this concept was having Ste. Anne River bridge as a focal point in the room separating the paper mill from the staging area. To make sure my idea was sound and safe, I decided to kitbash the bridge with Walthers components and see if it would work. The answer is a big... I don't know. It is harder to imagine this scene working that I thought... much harder. Also, the new town of Beaupré would be extremely minimalist in approach, with very little structures. It means the success of the layout would rely on carefully crafted backdrops, which can always be extremely tricky. 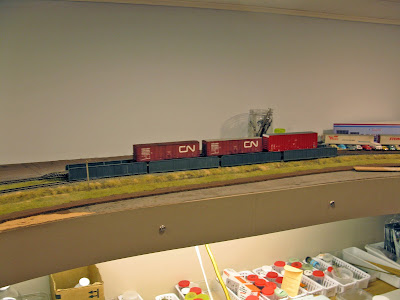 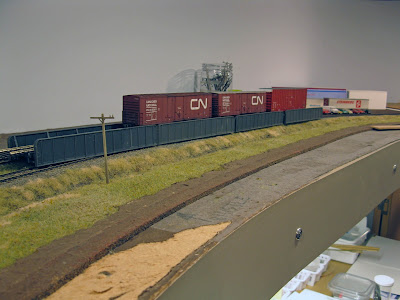 For the moment, I think it is safer to keep Villeneuve as it is and operate the layout as is, focussing our efforts on rebuilding Clermont to a satisfying level. While I don't close the door to Beaupré, it is better to take a few months, even years, to access what we have and play with it. A lot of efforts have been invested in creating Villeneuve and Maizerets so far and it would be a waste to not finish them. Operating Beaupré and pulling very long trains may be alluring, but we've got enough on our plate at this moment and we should fully take advantage of the new direction in Clermont first of all.

As for Villeneuve, Jérôme has been pushing forward to improve the staging area which has always been problematic. I don't know how exactly we will do it, but the goal would be to replicate how trains reversed and picked up cars before returning to Clermont. Given the half-hidden nature of this staging, things could get complicated quickly. We shall see in due time...

Meanwhile, so new rolling stock have been acquired using the money raised by selling surplus locomotives and cars. Still on the hunt for CN, IC and NOKL centerbeam cars. 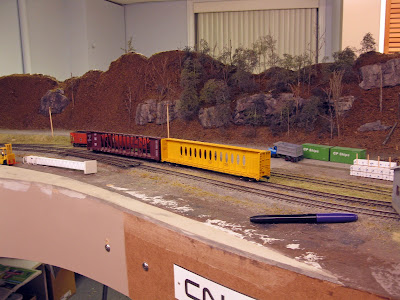 Posted by Matthieu Lachance at 8:55 PM