Rebuilding Clermont & Learning From Past Experiments

Rebuilding Clermont was a last night priority and it quickly became obvious we had to scrap most tracks in Clermont up to the grade crossing to ensure a good track alignment. Some scenery we thought we could salvage had to be removed too.

It could be seen as a step backward but in reality, it was among my first serious scenery attempts with this layout and I was far to be impressed with how I painted and ballasted the tracks. As far as I was satisfied with my work at the time and got a lot of good words from many modellers, it was time to upgrade my game.


A solid dark brown made the ties very unrealistic and the use of a very powdery ballast mixed with sand gave the illusion the area was sinking in a mud hole, which wasn't the case. If I was trying to model bad secondary trackage, it would have been great. But it wasn't the case.

Clemont was always ballasted with quite chunky granite in a similar fashion to what I did with Villeneuve. Even in time of neglect, the rail line didn't look that bad. I'm eager to remake the scene in a more convincing way.


We also discussed a lot about track radius. Originally, the peninsula mainline had a 24 inches radius which was always quite problematic during operation and didn't very convincing. We aren't really interested in enlarging the peninsula benchwork, however, it was found we could bump up the radius to almost 30 inches, which is much more acceptable. Not perfect for 72' centerbeam flatcars or 61' woodchip gondolas, but certainly better. Now, the radii of Clermont's three tracks will be about 30", 28" and 26". It already looks better.


Also, some shady benchwork construction techniques were used back in the days. It wasn't dramatic, but we will upgrade it a little bit with newer material. At some point, it was a fiberboard patchwork testifying of years of modifications.


We can't be sure how much time it will require to get tracks and wiring done, but we believe about 3 work sessions should be enough to do most work and reconnect the railroad.If by mid-October trains can run, we will be more than happy. In the best case scenerio, I'd like to have the photo backdrop installed everywhere in Clermont room and track painted and ballasted. It is not unrealistic, but my health condition and various other things out of my control can throw a monkey wrench in the best laid plan. I'd be extremely happy if Clermont could be completed within next year. Giving most structures are now built and that we reduced the scope, most work will involve adding scenery and trees, which isn't exactly the most exhausting step in the process.


It must also be noted we will add operating devices including derails and maybe working switch stands to make our experience more immersive. Some testing will be required to convince other club members, but I believe it is worth a try.

Finally, we must not overlook some crucial preparatory work performed on the sideline by Jérôme: cleaning tracks from glue and ballast. He probably spend about 2 hours scrubbing flextrack with an old toothbrush! 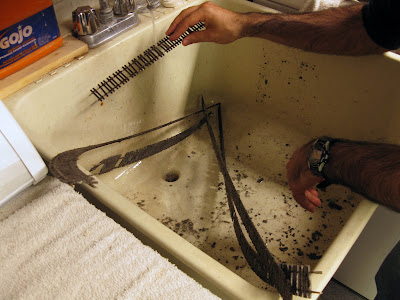 Posted by Matthieu Lachance at 6:36 AM