Yesterday evening was the perfect moment to put our plans to execution. With the help of Jérôme, several sections of the layout were rebuild, cork roadbed installed and track geometry refined to improve operation reliability and long term performance. Many issues were found during the process, which took us an additional hour to solve. Given we started working at 18:30 and turned off the lights almost at midnight, we can affirm it was an extremely productive session. To make sure Clermont will be back in service as soon as possible, we will take advantage of Jérôme's last vacation week and work on the layout next Monday, Wednesday and Friday. By the end of the week, everything should be functional and wired. Here's a summary of what we did last night...

The first step was to replace several sections of fiberboard that were altered by scenery and didn't provide an even surface for track laying. Since the new yard will be larger than the original mainline, it was also the only practical solution to get rid of too many joint between board. Once firmly secured on the benchwork, a cardboard template was used to draw the centerlines.

After a good discussion, it was decided to start tracing from the yard east end since it is were existing tracks and turnouts are located. 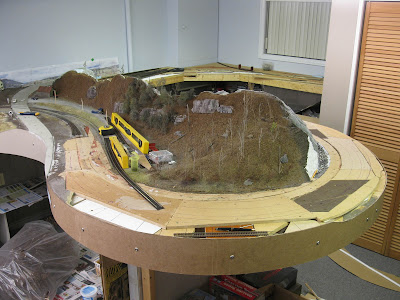 Working from that end, the new 30" radius exterior siding track was located, then the mainline and interior siding. Using a flexible stick, we connected the dots and made sure our curves had nice easements to offer more realistic and reliable transitions.


At the yard west end (toward Wieland), we found out the original fiberboard roadbed was completely out of alignement on a 4 feet long stretch. At some point, elevation could vary up to more than 1/8" over less than 4 inches! After throughout verification, it became evident the benchwork was perfectly level, but the fiberboard had been sanded and modified some many times since the peninsula original construction in 2011 that it was no longer salvageable. Everything was trashed and a new roadbed was built.

The next big question to answer was how to find a definitive track geometry for Wieland. Jérôme made quite a compelling point the wye leg should accommodate three 72' centerbeam flatcars. My initial design called for three 52' bulkhead flatcars. After fiddling for a while with track, it was evident we could accommodate that particular demand by pushing the turnout a few inches toward the furnace room. It did work and didn't had any significant impact on the small Reynolds spur. Also, on a positive note, it meant we can now have a 36" radius mainline with a sweeping easement for better operation. Quite useful given it is where our longest cars will be switched.

When all the benchwork was repaired and track alignment set, we started laying the main line cork roadbed. It didn't take that much time and we had even time to temporary lay some flextrack to see how cars would perform in the new yard.


From that moment, we now had an idea of how things would look in the future. And to be honest, we were more than pleased. Certainly, the new yard adds a lot of track density, which isn't something I'm generally advocating for. But in this particular case, the yard was a key element to operation and not just a fancy caprice. It was needed to perform the task and now we will have all the freedom required to do it.


From a visual point of view, the results are stunning. Not only having the yard wraps around the peninsula takes advantage of an ingrate geometry, but it also makes the scenes seem larger. When you are standing in Clermont, you see the tracks and cars disappearing behind the hill with no idea of where it will end. This give the impression the yard is quite long and create a visual illusion that expands what you perceive. Interesting because we didn't enlarge the benchwork... It should be streed that illusion didn't work before. 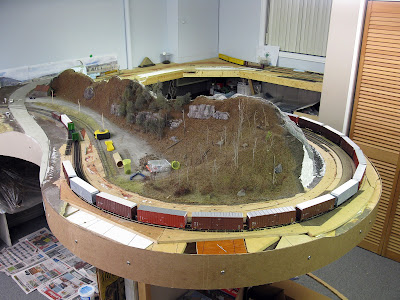 It also should be noted that since the yard can now hold a lot of cars, it gives the peninsula a very "railroady" look. It doesn't feel like a model, but you really sense a lot of things happen here and that the huge paper mill on the other side of the river must be feeded with cars... lots of cars. From that point of view, it feels like our layout is now about moving heavy tonnage on the rails, rather than a cutesy branchline. We've upgraded from a parochial vision to an industrial one... just like the prototype. 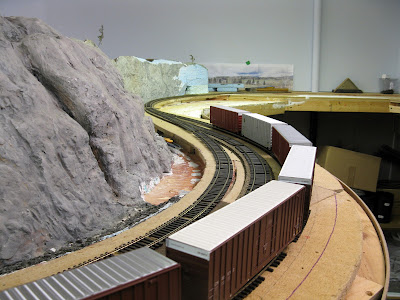 Another interesting point is the west end yard throat. If you recall my allegory of layout planning as a song, I'm happy to report it indeed works! When you are in front of the turnouts, you are indeed separated from the other scenes and feel completely immersed in what you do. This is also reinforced by the fact this new operation spot is located in an alcove instead of being in the middle of a peninsula.


We also discussed the possibility to model the wye east leg near the electrical panel or even add the propane (LPG) dealer siding. It would have been cool ideas, but the more we tried to fit them together, the less convincing the scenes became. I was aware of that since the initial planning steps, but it was interesting to try these ideas in real and see why they didn't work that well. Once again less is more, and this will be less work for us!

Finally, from a very technical point of view, the new yard can now hold up to sixteen 50ft boxcars per track. This will be more than enough to stage real trains without compromise.

Posted by Matthieu Lachance at 1:13 PM