With the layout concept and era better define, I've continued to work on building a prototypical freight locomotive roster. My goal is to have all the key locomotives that were in regular operation and also the few leased units that made a visual impact. A quick roster show us the following engines and the years they were in service on Murray Bay Subdivision:

To this roster, we can add insdustrial locomotives such as:

Of these locomotives, the easiest to get in service is CN #9423.


Some of you will remember when I wrote back in 2015 about the differences between Athearn and Atlas GP40-2W. I recall pointing out Athearn won in terms of details and accuracy, but Atlas had the upper hand in terms of performance and sturdiness. Many of you commented I should take a pragmatic approach and keep the Atlas locomotive. This thought was the reason why I didn't sell it and kept this locomotive... just in case.

Well... the just in case scenerio has now happened. Since we will mainly operate the layout circa 2002, we know CN 9423 ventured in Clermont for a while that year. I've got a picture from Denis Fortier that I recently posted that confirm this information. But better than that, I've found online a great deal of pictures of 9423 shot in the 2000s and was astounded by the amazing weathering pattern that developed on this particular locomotive. Interestingly enough, both sides of the locomotive are heavily weathered, but not in the same way, which I find particularly challenging in a positive way. 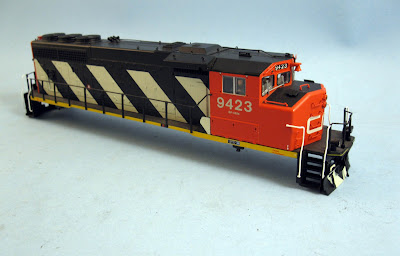 Knowing that and having surplus Loksound decoder, it was a matter of a few minutes until Louis-Marie installed sound in the unit. Twin speakers and a keep alive were also added. From that moment, the locomotive was ready to be renumbered. Some rivet counters will point out Atlas locomotive is a GP40-2W and not a GP40-2L (Athearn). Certainly there are quite a few differences including the frame height, however, after comparing several pictures, I came to the conclusion that when both locomotives aren't side by side, it is almost impossible to notice these differences. Given only one GP40-2W will ever run on the layout, such comparison won't happen. Further more, the heavy weathering will completely steal the show, making minor discrepancies almost irrelevant in this case. Given it was a generic CN locomotive, I see no point in pushing further. It wouldn't be the case with LLPX locomotives that were a staple on the road and that aren't heavily weathered. Also, if I think about my RS18u, I can see much more important discrepancies with this locomotive than what can be found with my GP40-2W.

That said, it was time to renumber the locomotive for real. As always, I started with the Solvaset trick to remove the unwanted lettering. I hoped it would work and after soaking for 5 minutes, the lettering was easy to lift up without altering the paint. A thin coat of Micro Gloss was applied and let to dry to create a good shiny foundation for decals.

Decalling was done using Sean Steele excellent CN diesel locomotive decals. These decals are hard to find are cost much more than your regular decals, but it is well worth the price. Sean took the time to replicate CN fonts instead of using generic Helvetica fonts. And yes, it matters because CN had quite a peculiar number "2" design that other sets generally fail to replicate. Given there is a "2" in 9423, it was important to me to get this right. In my mind, people won't notice a 2" lower frame, but will easily find out lettering isn't prototypical.

Atlas numberboards are factory painted white and a black layer is painted over it. This ensure they can be backlighted. Since I wanted to preserve that function, some Solvaset was used to remove the black layer. Once done, a new black decal with transparent numbers was printed then applied on the model. This way nothing is lost! I also went an extra step and created the numberboard artwork using a real picture of CN 9423. Can't be closer to the prototype! And makes aligning decals far much easier.

Now, as I'm writing this, I have to finalize the DCC installation and make sure every component is secure in the right place. Also, I'll replace the flimsy Atlas plastic sunshade with A-line brass ones. Years of handling locomotives have thought me nothing beats brass for such an usage. I hope weathering to be done in a timely manner so both CN 9423 and NBEC 1816 can it the rails as soon as Clermont will be rebuilt.
Posted by Matthieu Lachance at 5:26 PM