How can't we think about that old country song chorus when reflecting on what happened yesterday... But contrary to the song, it seems we will get farther that way.


I mentioned two days ago we found a lot of irregularity on track geometry in both axis. It was bad enough that cars wobbled badly and noticeably. It was unrealistic and unreliable. When investing so much time on a layout, you expect good results. Rushing bad trackwork wasn't a solution.


Reluctantly, we pulled up the tracks and cork roadbed, obliterating one full day of work. Under it laid a patchwork of irregular fiberboard shapes. A real shame honestly. I shouldn't post that kind of pictures, but I feel we learn much more from our mistakes and this is a perfect case study of sloppiness.


In many case, the fiberboard was sanded down to cancel the uneven nature of the benchwork. In the case of Clermont's team track, the cork was buried more than 1/8" into the board!


Under the fiberboard was an even worst substructure made of various bits of particle boards cemented with hot glue! Ashaming...

Then we reached the plywood... at least. But some adjustment had to be done before we could start building up again the roadbed. The peninsula legs were lowered of 3/8" to get the benchwork level again. For some reason we jackep up the structure about 3/4" a few years ago, inducing quite a grade (almost 1%) which made some train stall... Now we know why! Also, we found out the peninsula circular end wasn't sufficiently braced and new structural members were added. Once done, we had a perfectly level and sturdy base to rebuild the layout. 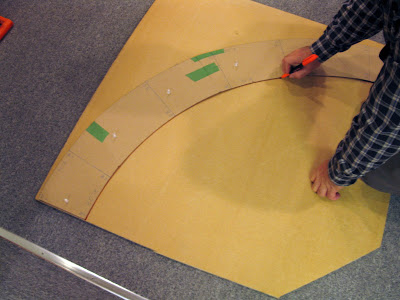 The new roadbed use the same principles as the first one, however, it has been improved to provide a stable and regular foundation. Arc segments of fiberboard of correct radius were prepared and track centerlines were traced prior to any assembly. This way, we have a perfect circle and laying track will be easier that way than trying to draw a circle on the peninsula. Particle board pieces we cut using the fiberboard as a template. This way, 100% of the roadbed will be firmly supported to eliminate all wobbles. 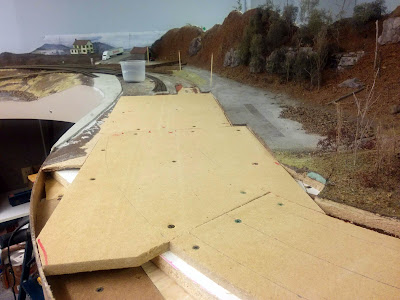 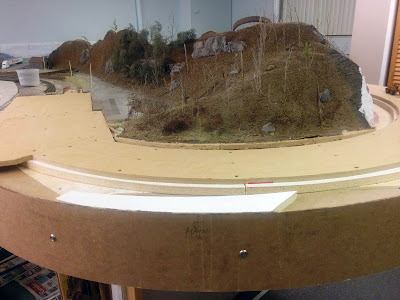 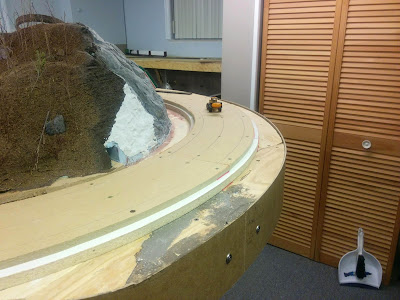 So another day and another lesson learned. Once again, cutting corners isn't an option. We almost rebuilt this section a week ago but deemed we could do with the actual situation... only to find out it was unacceptable. Rebuilding the roadbed took about 6 hours but trying to shim the uneven track would have taken much more time with no guarantee for good results. I'm glad it is now done. 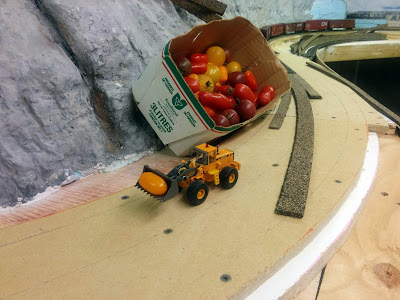 Posted by Matthieu Lachance at 8:40 AM