It took about 7 sessions of work over a little bit more than 10 days to completely rebuild Clermont and Wieland. It was indeed exhausting, with several 10-hour long days including frustrating steps backward. But it is done and better than ever.

I certainly had my doubts when I proposed this major redesign, but the improvement in terms of train movement can't be denied. From a scenic perspective, it is certainly less glamour than a mainline nested between a cliff and a mighty rive, but it can have it's merit. Maybe the most unusual feature of the yard is being on a curve. Generally, people will try to build them as linear as possible. This is, indeed what common sense would tell us. More than once, you end up with curved yard ladders that are hard to operate due to couplers misalignment. My guess was that it was far better to put our turnouts on almost straight tracks and curve the yard itself where no coupling generally occur. This gave us the opportunity to use #8 and #7 turnouts without compromise or resorting to S-curves.

However, rebuilding the layout in such an extensive way required some sacrifice. But at the end of the day, it was a good decision to cram as much work as we could during the last week because we estimated this would have taken at least 2 months under our habitual schedule. It would have been unacceptable. 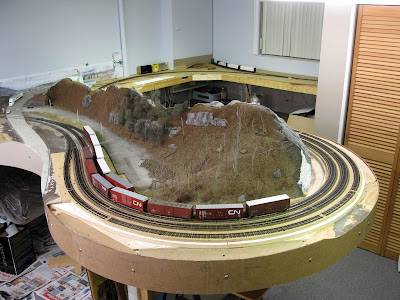 Our last rebuilding session yesterday went smoothly. Due to the new roadbed, installing the track only took 5 hours and we got no particular issue during the process. Also, it seems our yard throats are better laid than the first time we did it a week ago. The smooth transitions ensure reliable operation with longer cars. 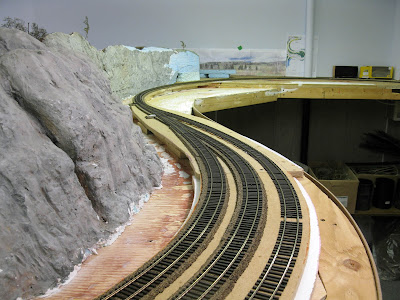 As for next week, we will put priority rewiring the layout. It shouldn't be too hard because bus wires are still in place and only new feeders need to be installed. Once done, it will be time to operate once again but this time with MRI switchlists and fine tune everything before even thinking about scenery. 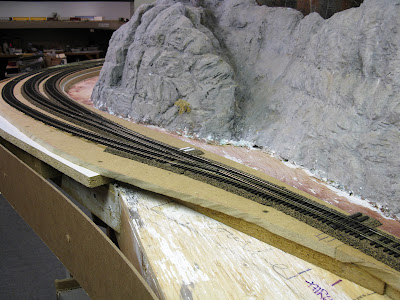 But scenery will soon have to be taken in account and I can already say the peninsula will see quite a few drastic changes more in line with the prototype. For the moment, it has been agreed to work scenery from Wieland toward Donohue. I’d really like if we could start fleshing out Wieland by Christmas, but we will see in due time because some other tasks are more urgent.

Among these tasks, we are planning to clean the room and get rid of unwanted material. We own several items that are no longer of any use for us and they clutter the space. Some will have to be simply thrown in the dumpster, others will probably be sold or simply given to whom can have a use for them. 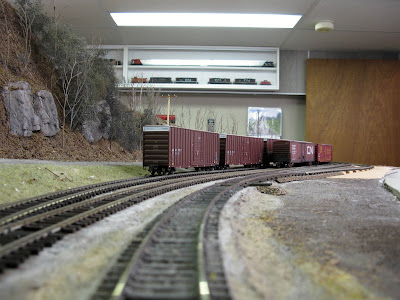 Meanwhile, I’m a little bit overwhelmed by the sheer amount of projects accumulating on my workbench at home. Several locomotives, completing woodchip car 3D design, working switch stand for turnout control and several others.
Posted by Matthieu Lachance at 6:54 PM