When good friend Trevor Marshall, with the help of Chris Abbott, got the idea to use Sunset Valley switch stands to active turnouts on his Port Rowan 1:64 layout, he was on something that had the potential to change the way we interact with model trackwork.


Using his excellent design as a starting point, I’ve decided to push it a little bit further by using the stand switches as a mean to tell my train conductors where they are. As we know, most stand switches are equipped with a colored target that gives us an indication about which direction the point is facing and the siding identification number. It is my belief this feature can be easily implemented on a Sunset Valley switch stand to improve safety and awareness about turnouts.

Indeed, the large colored target would be an efficient visual device to tell at a glance how tracks are aligned. Furthermore, by adding the track name on the target – per prototype procedure – it helps the operator to know where he is without resorting overly blatant contraptions such as miniature track plans or various labels on the fascia. Given the JMRI switchlists are built using the track numbers, it will be easy to know where a task must be performed.

Jérôme also suggested bringing things much closer to the prototype by replacing the target with something much more in line with Canadian National practices. Modifications to the Sunset Valley stand switch are minimal and only require removing the old round target and replacing it with an appropriate CNR one. I cut mine in a 0.81 thick brass sheet (the same thickness used by Sunset Valley). Also, a small disk and square were also crafted in brass and soldered on top of the shaft to better indicate the selected turnout route. The disk and square are assembled together using half length slots. Small slots are also provided on the switch stand shaft to provide a sturdy joint. 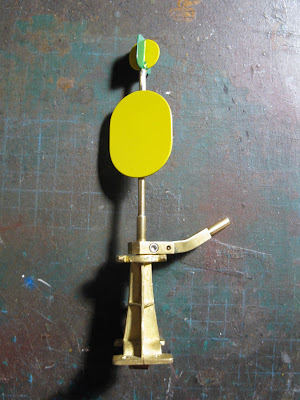 Targets are painted in an appropriate color with spray can enamel paint and self-adhesive or dry transfer 3/16” letters applied to complete the stand switch identification. A good coat of varnish protect the finish.


Interestingly enough, when browsing again my photo archives, I found out that main line switch stand handles are painted in yellow to enhance their visibility in Clermont yard. While paint wouldn’t make a lot of sense or stand out a lot, Trevor Marshall pointed out in his article he added a rubber sleeve on the handle so that an operator using this particular switch would instantly recognize it as a specific function due to the change of texture. I suspect a chunk of shrink tubing could do the job nicely.

This is basically a test and I’ll be honest here, my fellow club members felt I was wasting my time (and theirs) on a gimmick. I was glad to find out Jérôme did like the concept once implemented. While this is a neat idea, we feel it would be better to only equip turnouts in Clermont. However, we are not sure about implementing this system at Donohue or Villeneuve right now due to the prohibitive cost of Sunset Valley stand switches and the extensive work required to modify and install them. It also takes up some space and Villeneuve benchwork has several desks and tables under it... Having about 4 or 5 switch stands cluttered together near a yard throat could be a serious space issues. We will have to think about it for a while.

Without taxes and shipping cost, each turnout control system cost about CDN$45 or US$34 (including Bullfrog turnout control, SV switch stand and brass plate). Certainly great for smaller layouts or simple designs, but definitely prohibitive. With 26 turnouts on our layout, that would be a sizeable investment and I feel it is better to add these turnout controls where they can make a significant difference: the main yard. I feel having at least this specific location prototypically operated would be a big step forward and the addition of working derails on the sidings will also add another layer of realism.
Posted by Matthieu Lachance at 4:54 PM