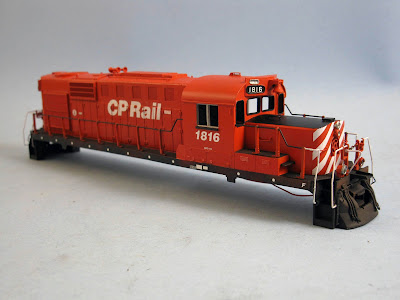 Talking of decalling a CP Rail locomotive, getting the stripes right is always quite challenging. To make my life easier with stripe decals, I cut paper templates that fitted the RS18u curved geometry then cut the decal to size making sure the stripes aligned as shown on the prototype. Not only it eliminated the guess work, but it also made application speedy, easy and accurate. 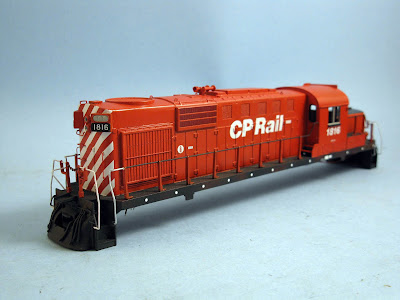 Back numberboards are 3D printed from Shapeways. I designed them in SketchUp and I'm pleased how they turned out. However, I made some mistakes and their location isn't 100% accurate. This is the kind of detail that won't be really noticeable, but to be honest finishing touches really makes me realize this model is full of shortcomings. Starting with a Life-Like shell wasn't exactly the greatest idea on Earth and I would probably never do it again. 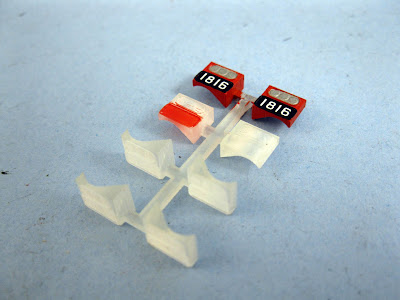 A set of Rapido ditch lights was also added on the front pilot. They aren't exactly the correct prototype for this particular model, but I decided it was better to compromise a little bit on that and have a working model in a decent amount of time. However, I did paint them as can be seen on pictures, with the red brackets and silver rings. 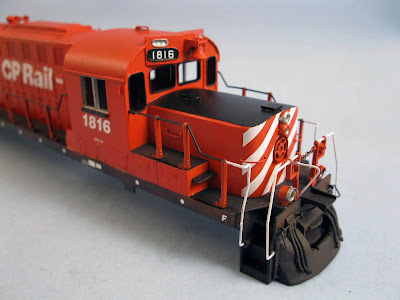 You will also notice I added a triangular shaped handrail on each ends that projects over the drop steps. I didn't initially plan to do it, however, since I've taken additional steps elsewhere to make this model as close as I could to the prototype, I thought a little bit extra work would pay off. A little chain was also hanged at the same time. 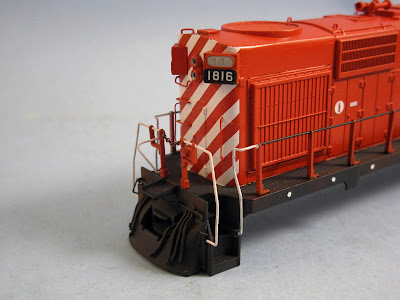 Now, the only remaining steps are installing DCC, a sound baffle and, of course, patching and weathering the hell out of that shell. I'm really looking forward to it! 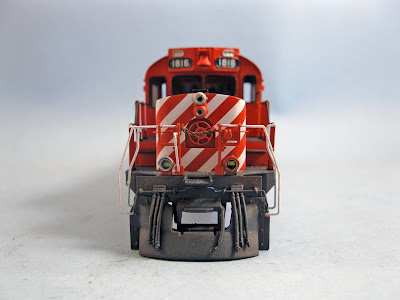 Posted by Matthieu Lachance at 1:37 PM