Rebuilding Clermont, my daily job, university classes and urgent renovation work on my house have kept me quite busy and drained my strenghts over the last few weeks, so I'll take things easy over the few next weeks. Fortunately, remaining modelling work is less demanding and can be done in a more relaxed manner. 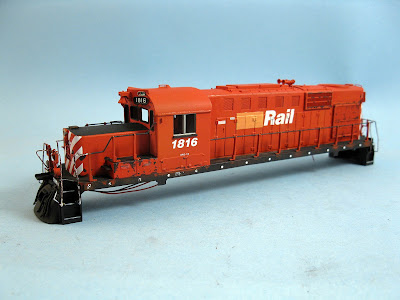 During the last week end, I started to weather NBEC 1816. After giving some thoughts about this task, it was convinced to approach this complex matter in several steps instead of rushing it in one day. 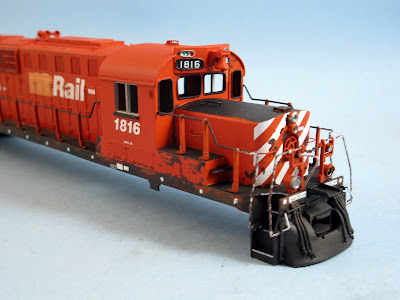 Among the first step was to add paint peeling and rust effect. Indeed, according to prototype pictures, paint was flaking off badly on 1816, particularly on the ends and battery box panels. It was also evident the exposed layer of rusted steel was covered in dust and grime. This is why I elected to do it as a first step prior to any fading or wash. 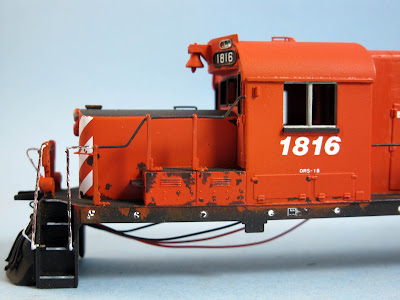 Using an extremely fine paint brush and thinned down dark brown acrylic paint, each rust spot was replicated. I went a few extra steps to ensure each rust spots was as close as possible as real. It took about 2 hours, but it paid off because what you get is a true 1816 and not some stand in. 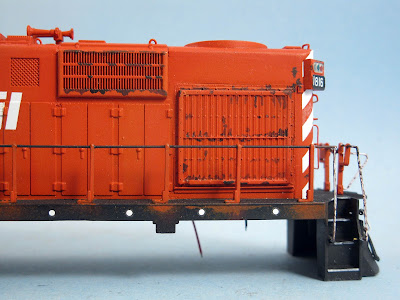 When done, I used some very thinned down CP Action Red paint and added red spots on the black sill. On 1816, the black paint was eroding, showing the red color underneath. I felt it was a really nice effect seldom modelled that was well worth my efforts. The trick was to build up the color with several thin layers instead of coating heavily the model. You probably recall that when I painted the locomotive, I already airbrushed some red in these areas to feather the future eroding paint effects. 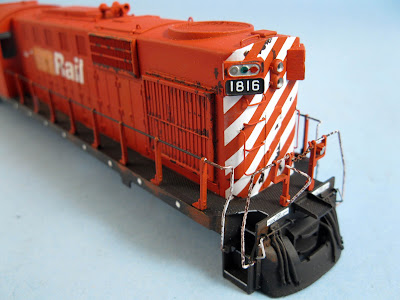 Also, I discovered some decals were missing on my model. Several warning labels and white dots were applied to the 1816's pilots. Fortunately, these labels are included with Microscale CP Rail diesel locomotive decals. Now, only the NBEC initials need to be added... I'm still waiting to get some decal in the mail.

Finally, classification light lenses were made with blobs of paint. Green and Red lights are old Testor metallic enamel paint. The trick was to not shake the bottle so metallic flakes would stay in the bottom and the translucent paint would sit on top of it. Enamels are great for this purpose because they won't dry flat like acrylics but will make semi-circular lenses.

The white class lights are made differently. A bright aluminium acrylic paint was brushed where the lenses would sit. When dry, I took some gloss medium (in this case Micro Gloss) and tinted it with a hint of black. No need to put too much black, just enough to look slightly dirty. When applied and dry, it creates a characteristic glass translucent effect typical of uncleaned class lights.

Posted by Matthieu Lachance at 6:25 AM