Last Friday was spent installing the cork roadbed and laying track. While these things are relatively straightforward process, we had to give it some thought, particularly in Wieland where space is premium and operation must be smooth.


Finding a solution to Reynold's (General Cable) spur took a good hour if not more. Various iterations were tried until we reached a track geometry that was both reliable and good looking. Fortunately, we were able fullfil our goal of having one car spot long enough for a 65ft gondola while keeping the chain-link fence gate and derail. However, we came to the conclusion the new alcove is kind of dark due to shadows and will have to be enlarged a little bit to look better. 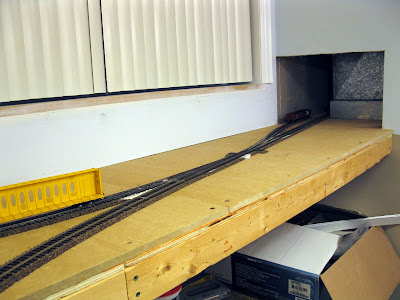 We also managed to install all the cork roadbed including the sidings. In the case of Clermont Yard, it was decided the exterior siding would be sitting directly on fiberboard, making this track obviously lower that the main line. On the prototype, it is the case and there is a good feet if not 18" of difference. In HO scale, this translate to almost 5mm, which is shy of a 1/4". We agreed this difference in roadbed height have several advantages. First, you can see a train moving on the mainline even if the siding is full of cars. Visually, it makes the scene more dynamic. Ans finally, it helps to break the impression of a large web of track out of nowhere on the peninsula. 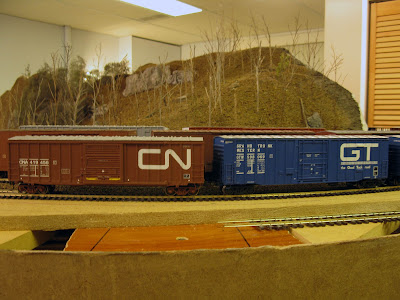 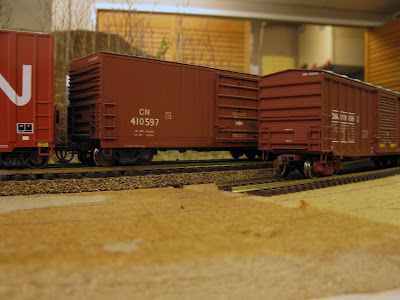 And that's all for the positive things that happened that evening. Next step will be to complete track laying on the siding (the mainline is completed now) and start rewiring everything. 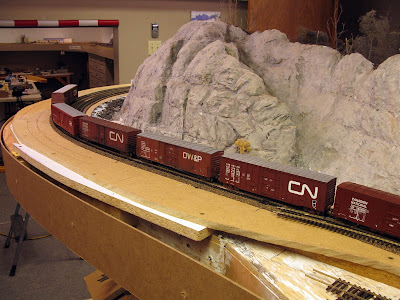 On the negative sides, we had to remove ballast and some tracks that we
re kept until now in Clermont. It means all tracks will be new starting at the grade crossing. The final decision was reached because the ballast and track paint job weren't on par with our better work. Also, we found out it was required to realign the small siding that used to serve as a team track because it didn't look good with the yard alignment.


We also discovered while making operation simulations the team track will have to be used to store excess cars. Our yard will be busy and this piece of track will be quite useful during operation. on the prototype, this track was indeed an extra storage siding and thus, we end up having to follow it up. A team track with MoW cars would have been cool, but it makes very little sense if this goes against layout operations. Also, from a scenery perspective, it will be easier to blend things together and I have already a few ideas. Nevertheless, it is interesting to see that where we went proto-freelance it wasn't optimal and we have to come back to ideas that are already used in real life.

The final negative point is much more annoying. The interior siding in the yard isn't level. It was to be expected since we kept the old fiberboard there. Well, it just doesn't work and shimming every piece of track here and there will be both time consuming and won,t guaranty a goal result. Quite frustrating to remove track that had been relaid, but I see no point compromising on track reliability. Less is more also means you must have better quality and standard. If not, it's just cheap.

And now we can talk about something interesting. Jérôme started to sift through old paperwork, timetables and official documents in his archives. He discovered CFC timetables fitting our era, but also official paperwork, instructions to switching crews and car blocking in Limoilou. Very neat stuff that will certainly bring more life into operation.

I also started to work improving Trevor Marshall's turnout manual control made from FastTrack's bullfrogs control and Sunset Valley brass switch stand. Mechanically, it is the same principle, but I decided to had another layer of realism in this neat design. I hope to be able to share it within a few weeks.
Posted by Matthieu Lachance at 7:37 PM