We could have expected the rebuilding program to have been relatively straightforward... almost a piece of cake... But the walk in the park kind of turned into a substantial carpentry project as more bumps, dinks and other annoying problems started to surface when cork laying was in progress.

It quickly appeared that many structural elements had suffered deterioration over the year and this caused serious vertical variation that were far beyond tolerable. Near the electric panel, the benchwork was in really bad shape and warped. This was caused because it used to be a lifting section that was lightly built and warped. It was later altered to include a small river, which further weaken the parts. Adding extra material later didn't help the situation either.


Where we planned to model the wood transloading terminal, the benchwork had a grade of 1/8" per 2 feet toward the electrical panel. It meant any car set on this track would roll back on the mainline, which is far to be the intended result! Rebuilding in this case isn't a luxury.


On the other side of Wieland, where the track goes through the furnace room, it was evident the transition between the benchwork and hidden shelf supporting the track was far to be stable and sturdy. Back then, access there was quite limited and we did what we could. After a quick deliberation, it was decided to simply open up the wall and redo our job better. During the process, we found out the partition wall was built in the most haphazard way by the previous owner... Fortunately, it was sturdy enough to be kept. 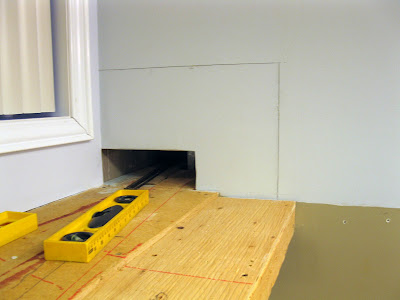 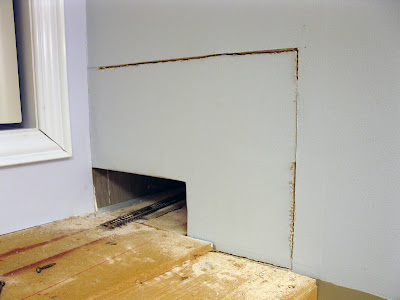 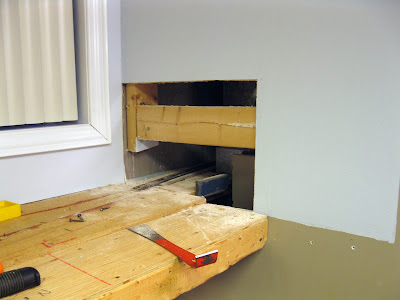 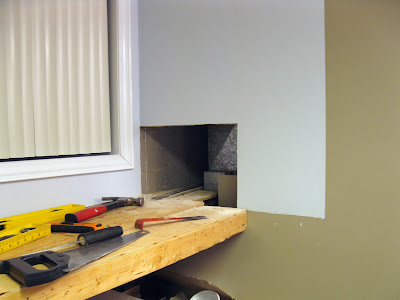 On the positive side, we discovered several obsolete apparatus on the furnace weren't removed when it was recently refurbished due to access limitation. Having a hole in the wall was a good occasion to take them away, which gave us additional space to better align our tracks. At this point, I'm contemplation the idea to enlarge the hole a little bit and make it an alcove. This way, I hope, it will be possible to create a better transition between hidden track and Wieland, and more room to create a more fonctional Reynolds's siding.

As you can guess, the next working sessions will deal with carpentry and rebuilding the benchwork to better standard. Meanwhile, Jérôme has proposed to narrow a little bit more the benchwork in the between the yard west end throat and Wieland to improve access to rolling stock during switching. At first I had my doubt, but his argument is perfectly sound and it will make for more balanced scenes.

Meannwhile, I also started to prepare tracks, replacing missing ties on salvaged Peco flex tracks and prepping them for installation. We also completed DCC sound installation in my Atlas GP40-2W, which means this project can now be completed. I also got my airbrush nozzle replacement, so basically, my locomotive reworking program won't suffer delay. 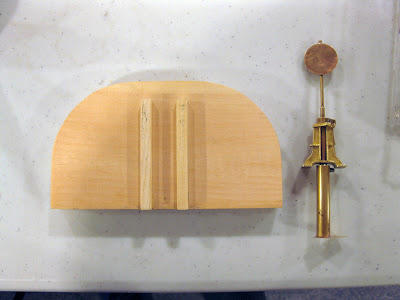 Finally, I also did some work on a functional switch stand to manually control a turnout. This idea isn't new and has been (succesfully) advocated by Trevor Marshall for many years. I recall buying a Sunset Valley brass switch stand about 4 or 5 years ago but not doing anything with it. Now is time to put this neat idea in action. I'll probably go a little bit further and replace the round target with an oval one as CN uses and paint it yellow with it's intended spur number. Given the switchlist in JMRI are programmed using the sidings numbers, it will be a visual key to know where you are when operating. If you are interested in the mechanical aspect of this system, Trevor has put together a nice How To article for Model Railroad Hobbyist in August 2014. It can be consulted online and provides instructions and a bill of materials.

Now it's time to go back to locomotive building and weathering!
Posted by Matthieu Lachance at 6:55 AM