Atlas NSC boxcars are nice models. Well done, with crisp details, their only shortfall is the flimsy plastic stirrups that flies away at the slightest air movement. 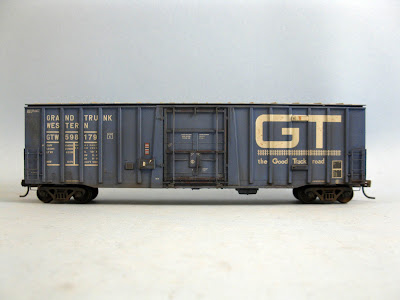 As a kid, I recall freight consists were uniformly brown... CN, CV and DW&P. The only touch of colors was GTW boxcars which clashed brightfully against that drab background. No wonder I developped a fondness toward these cars and was extremely thrilled when Atlas released a prototypical version instead of another foobie. 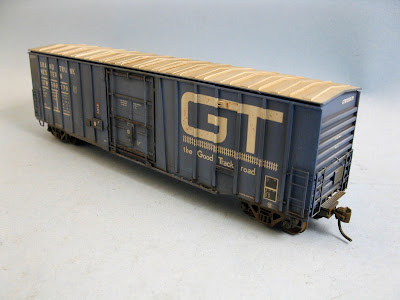 Out of the box, the cars were far too blue. GTW blue paint notoriously fades to a chalky sky blue after a few years under the sun. Thus, I had to lighten the cars with several light coats of white and beige. 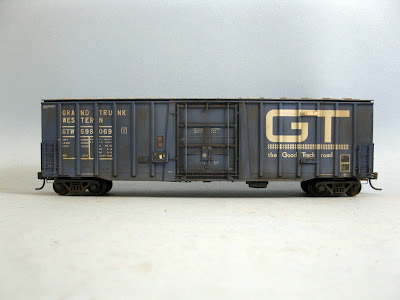 Another interesting pattern is how dirt becomes instantly visible on a light colored boxcar. On prototype, GTW cars have distinctive light brown rain patterns against the ribs and large patches of rust of dirt on the upper part of the panels. Failing to replicate these weathering pattern won't yield realistic results. 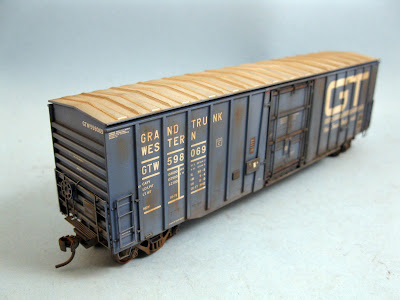 A final distinctive weathering feature is the door rust. Even on seemingly freshly painted car, heavy rusting occurs on the horizontal members of the plug door. This contrasts quite a bit with the relatively pristine sides and add a layer of history.

Speaking of history, my favourite details to complete a car is adding bills of lading and waybills. They are small bits of paper that certainly makes a difference when looking at a completed model. I now consider this practice a must on all relevant freight cars on the layout.

Posted by Matthieu Lachance at 10:06 AM