As I continue revisiting several layout concepts so they can fit within my display cabinets, a new vision of Monk Subdivision start to emerge. Simplified and narrower (about 16"), this different take on the project tries to wrap around the corner the entire station, yard and depot. You'll also remark the main line isn't parallel to the walls, but flows diagonally to create space for various railway function (the shops, the depot, etc.)

One big change is to only consider the cabinet area as the main operation focus, the rest of the smaller shelves acting as a simple runaround track. On that loop, one two-ended siding could be added to stage a train or two in advance or act simply as a originating and terminating point for trains.

I also decided to keep the yard as small as I could, simply keeping a long passing track and a smaller two-ended team track serving various customers, including an oil dealer. While studying a few pictures from Monk, it became quite clear a freight house used to stand left from the large depot. It seems to have been a regular standard NTR model and the team track there could handle a few freight cars, maybe 3. 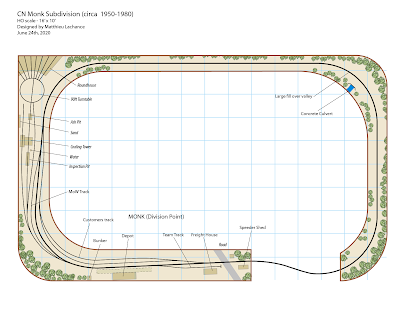 The turntable has also been relocated in a corner so the service tracks could be longer and more realistic. Having the locomotive shops on the opposite side of the layout creates a visual tension on the layout while providing an interesting focal point when entering the room. For the sake of convenience, a small MoW siding was added so some interesting rolling stock such as work trains or cabooses could be displayed there.

The continuous run could be scenicked of left as is. It could also be possible to imagine a small customer such as a feed mill located on the curve for the sake of performing smaller local train operations. But it wouldn't be required per se.

This version of Monk is probably much toned down compared to the original concept which was sound yet a little bit crowded to my taste. The goal was to create the impression of a track surrounded by nature and wilderness as was the NTR. Structures are clustered together, track density kept as low as possible and most secondary trackage would be in bad shape or covered in grass as was the case on the prototype to emphasize the linear nature of the mainline. I once tries with with Villeneuve on the club layout and found it was a neat trick to create the required hierarchy of track use.

I've also experimented with a slightly different version with a completely scenicked continuous run. While it could be interesting, I think this plan kind of thin down the intial focus on the cabinet area. 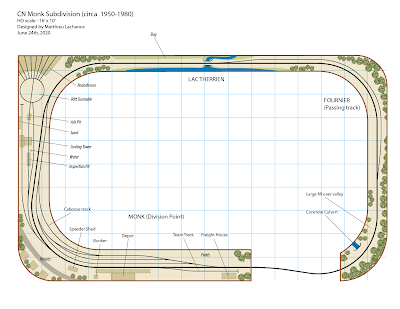 Posted by Matthieu Lachance at 10:54 AM