The last two weeks have been spend redrawing completely the 878000-series woodchip car to get it right. It was also the perfect occasion to think about how it would be printed, the level of details and how the thing can be assembled by modellers with various skill levels ranging from newcomers to skilled craftsmen. 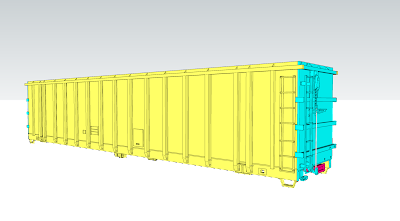 This new pre-production model will feature 3 main parts: a 1-part body with sides and underframe details and 2 end parts including ladders and brake platform. Gluing them together will provide a complete model. 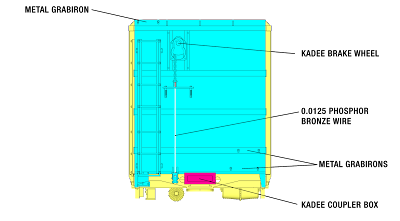 The modeller will have to add a few grabirons, glue the brake wheel, cement a brake rod and install standard Kadee couple boxes and S-2 Barber trucks. Ladders, brake housing, brake plaform and fullcrum are already printing and don't require assembly. Same thing for underframe brake reservoir, valve and other such things. I've also made the stirrups molded directly on the shell. I'll see if they are sturdy enough to be worth it, but from what I've seen, they should be fine. That said, more detail driven modellers will have the option to remove the stirrups and replace them with metal ones if desired. 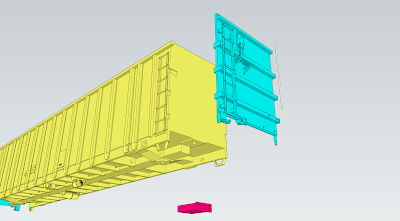 As for brake rigging, I've provided none. The reason is simple: most modellers don't care about that while the ones that do care generally prefer to add the details themselves according to their own personal standard. So instead of providing a half-baked solution to both type of modellers, I prefer to offer a decent underframe upon which one can do exactly what he wants. I'll probably provide a brake rigging diagram for guidance. Also, holes in the underframe are provided to install air lines. 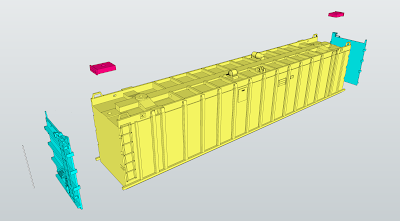 Weight was certainly a problem for these open cars. While a neat underframe is always cool, these cars can be often seen travelling empty on layouts. Thus, I feel the interior should be as accurate as can be. It means I've design a recessed floor in the underframe which can hold a steel weight that brings the car within NMRA standards. The weight is then covered with a 1mm styrene sheet to hide everything and provide a smooth floor like the prototype. 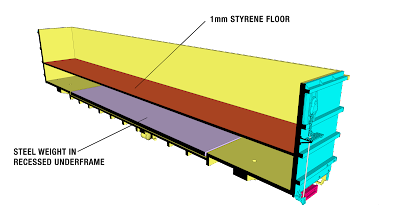 For couplers, I originally designed quite complicated and nice boxes, but the thing is 3D printed resin can be brittle when you drive a screw in very thin-walled parts. Most of them broke on my pair of preivous pre-production models, so I've been advised to simply swith to Kadee. To be honest, the difference is barely noticeable, even under closer inspection.

So now I only need to get the printed version of these new pre-production models. As you can see, I've had to make a few compromises to take advantage of technology instead of fighting against it. In some sense, it has made the model easier to assemble and sturdier, which is a good thing. I know a few people will want many cars in their fleet and assembly should be relatively straightforward. I'm also happy the model can provide a good starting base for a fully detailed model. I took care to have coupler drawbar supports were required for this reason.

Posted by Matthieu Lachance at 12:47 PM