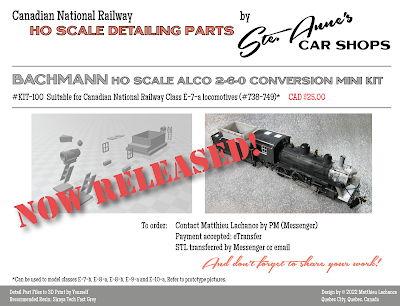 The kit includes several parts required to convert a HO scale Bachmann Alco 2-6-0 into a credible Canadian National Class E-7-a locomotive. It can be used to model other Class E locomotives too since most of them shared similar characteristics. 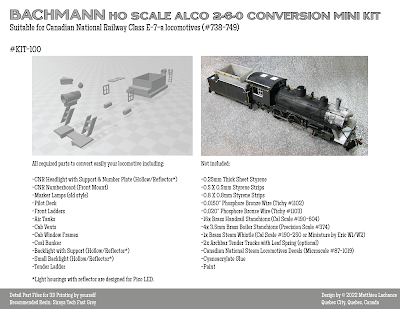 Many parts in the kit are multipurpose and can be used on other locomotives, including numberboard, headlight, backlight, marker lamps, etc. The kit comes also with a 5 pages illustrated instruction manual describing the steps required to complete your model.

You can also purchase STL files individually if you only need a few ones: 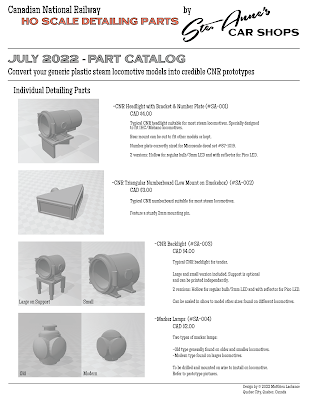 I'm also planning, as data will be available, to release different coal bunkers since many types were used on Class E locomotives. These bunkers will be offered graciously to people who have purchased the conversion kit. This could open doors to many options!

The STL files are sold for CAD $25.00 which is quite a deal given the price brass detail parts cost nowadays. I've evaluated printing the entire kit should cost you less than $2.00 in resin and take about 2 hours maximum. The more you will print, the more economical it will be. Files also includes the supports, which will make print setup faster. If you encounter issues while printing, contact me. It will be a pleasure to make sure your parts are printed as they should.

To order, contact me directly by email or on Facebook Messenger via the Ste. Anne's Car Shops official page. Accepted payment method is eTransfer for its inherent versatily but Paypal is also accepted.

Thanks for your support! Depending on the interest, I'm looking forward to release other parts and mini kits to convert generic plastic locomotives into decent and credible Canadian National prototypes..

Posted by Matthieu Lachance at 1:30 PM