Time to move forward with covering the ground with vegetation. The layout being set in late summer/early fall, a mix of dry and green grass is required.

Looking at several prototype pictures from my "inspiration" folder, it became evident that burnt dead grass was often lining the tracks on the gravel shoulder, followed by straw colored dying grass, then some dull greens. Thus, I decided to go forward with that recipe. 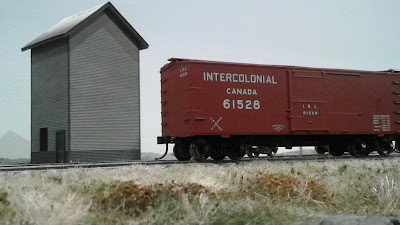 I worked by stretches of about 2 or 3 feet at a time, repeating the same procedure over and over, making sure to implement a few variation to break the pattern. Most grass was applied by hand directly in white glue, using a random daubing motion. I really like that step. 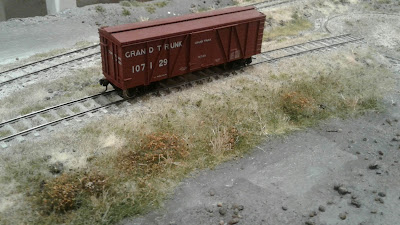 Ground foam was also sprinkled here and there to model small plants and I added some tall grass on the lower portion of the roadbed and ditches. That's probably where I made a first mistake. I used very dark green long static grass thinking that vegetation in the ditches would be greener, but looking at pictures again, I found out they also die rather quickly (at least, the very long shafts dries early). Using my airbrush, I toned them down a little bit and added leaves over them to create bushes. 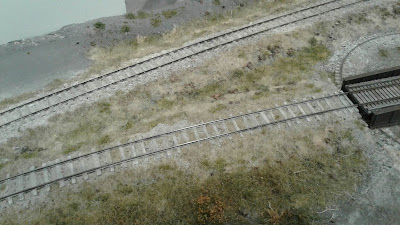 Speaking of bushes, it was my first time using polyfiber and creating them. Quite easy and effective. They were sprinkled with Noch leaves and foam. I only add very bright green leaves, thus I decided to change their color by mixing them with some PanPastel into a small container. A really effective way to alter their color! However, I made them brown and they should have been closer to a yellowish green. I'll probably fix that in the future by making another batch of leaves. As you can see, ones should always follow pictures in such cases. 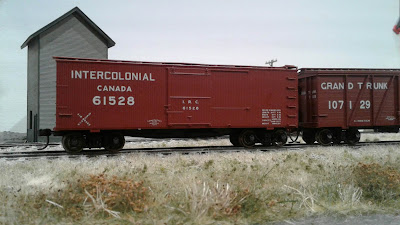 I haven't yet covered the fields because I want to experiment with basket liners as often shown in UK modelling books. It looks like a very interesting way to create tall grass in an effective and realistic manner. 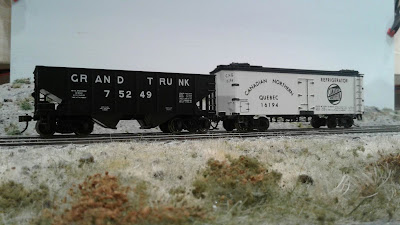 Posted by Matthieu Lachance at 8:22 AM