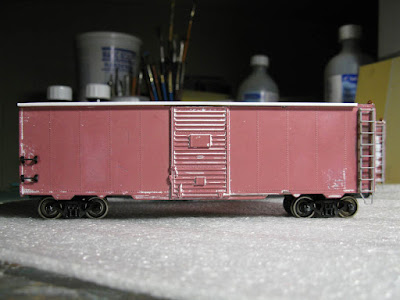 After getting some supplies (styrene strips and channels), I completed two woodchip roofless boxcars and primed them. 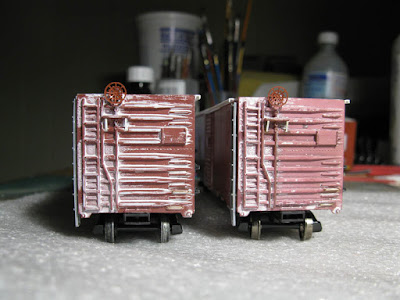 They represent the most basic CN prototype: cut the roof, add steel channel to give some strenght on top of the car and weld the door. If you look on this close up view of a 1982 picture shot by Marc Carette, you'll see the two first cars are of this type. The entire picture in better quality can be found in Groupe TRAQ archives. You can also find a lot of cars have their original door in place. I would say that's true for the 5 or 5 first cars. That means a 1/3 ratio with welded original door would be right in my car pool.


As previously stated, I started with MDC shells. The door were cast on but finely done and thus were worth salvaging. Side ladders and grab irons were removed, the roof too and I also partially removed the door tracks as per prototype. Later,, I found out while examining other pitctures the upper track was always kept in place under the steel channel. 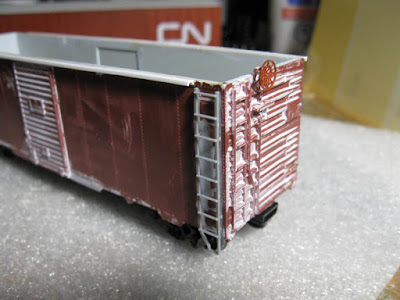 Tichy canadian ladders were added and Tichy grabirons too. Ends grabirons are bronze and a Kadee brake wheel replace the clunky original one. Small bits of styrene were used to make brake platform brackets. Finally, I added Plastruct 1.6mm channel. The cars received a coat of Krylon Red Primer. Next step will be to add underframe brake rigging and airbrush the models with Model Master Boxcar Red. They weight a healthy 6.3 onces. Styrofoam load with glued real wood sawdust will complete them. 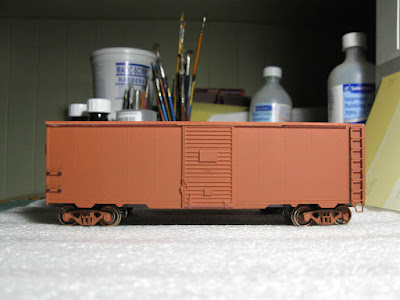 Most of the work on this prototype was to remove some MDC crude details. Working with more recent and better models with separately applied details would speed up tremendously the job. One could use unpainted Intermountain boxcar or a similar model. The trick is to install canadian 8-rung ladders. If you want to be 100% accurate, you can bash a True Line boxcar, but you got to have a large budget! 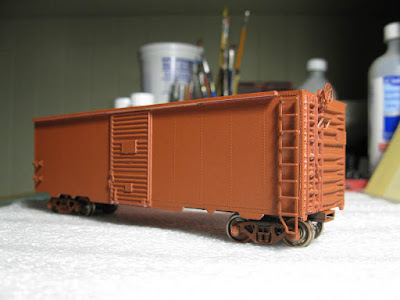 Next step is to build the next variant which has steel extension and new custom-built door. I have prepared 3 shells for this next group. 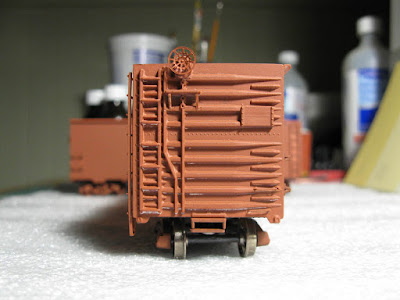 Posted by Matthieu Lachance at 9:33 PM