I worked all week end on my M420 after stripping the paint.  16 hours of work later, the project reached a interesting point. 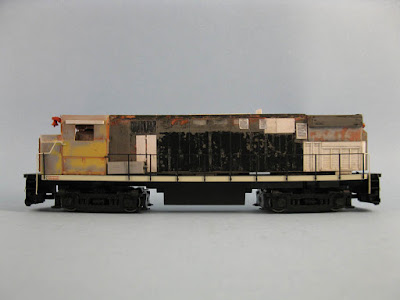 The broken resin cab required good restoration work. After gluing it together, I had to modify the front cab door (round corners), modify the battery box doors under the cab and realign the side windows. New sunshade rails were made out of Plastruct styrene C-channel altered in a L-shape. Other noticeable modification including getting rid of the round fillets on the nose with Magic Sculpt Putty. This is an EMD design. MLW cabs didn’t have fancy like fillet, all corners were square giving a particular brutish feel about this particular locomotive. Sand hatches were also scavenged from an Atlas Trainmain RS32 shell (previously scavenged for my RS18 project). 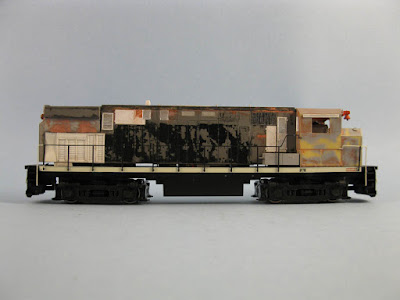 Remaining things to do on the cab include framing the window, adding the all-weather cab extension, a bell, a horn and headlight. Some detailing must be added to the battery boxes too. And, I’ll need to drill holes for classification lights. 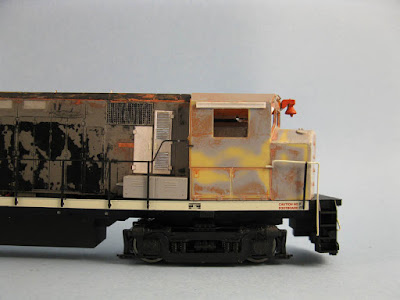 The body shell required a fair amount of surgery. Beyond repair parts were removed, including a butched set of grille and the rear louvers. New doors are paper cuts and new louvers are aluminium foil embossed on an Athearn GP9 shell. The rear louvers were made by scribbing styrene sheets with a dull hobby knife blade. The relief was they cleaned with a round blade to give them a slated look. Later, I layered thin styrene sheet details to make the frame, hinges and latches. So far, so good! I was sure it would end up as a mess.

For the roof, I decided to keep my sculpted wood plank in place. I added scratchbuilt lift rings, a new styrene stacks and ventilation trap (don’t know the real name of that platform sitting in the middle of the roof). Finally, cab steps cut from the RS32 shell were glued on each side of the body. 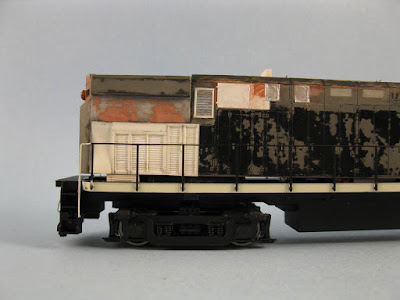 There’s still a few details to address on the body shell, including filling the number boards area, but it is mostly completed.

The real big challenge starts now. M420 running boards are kind of unique. There’s a lot of similarity with a RS11 frame, but the comparison stops there. I’ll probably have to kitbash, even scratchbuilt entirely this part. Once finished, the new frame will be permanently glued to the body shell. Finally, the cab, painted and detailed, will be screwed in place from beneath. Then, I’ll probably add scratchbuilt brass handrails. There’s very little alternative about the stanchions. It will be the last ordeal. The one against which I lost the battle the first time I built this kitbash 14 years ago. This time, there’s no turning back.
Posted by Matthieu Lachance at 8:32 AM