Last Thursday, we gathered at the club but didn't built anything. For once, only operation mattered. To be honest, it's been many years since we purely played with the trains and that's good to be doing it again without worrying about anything else.

Except bad electrical contacts caused by dirty rails (we did a lot of work recently), things went smoothly.

I operated Limoilou switcher doing ajob at Ciment St-Laurent. It took be a full hour to work things out at the cement plant. Spotting a bunch of boxcars and hoppers under a structure may seems simple, but it quickly ends up as a real chore.

Jérôme decided to try his new idea about operation which is to split the Clermont-bound train in two distinctive trains: one serving only the paper mill and another one serving Clermont's other customers (team track) and Dominion Textile. He only run the newsprint train, but so far the experiment proved to be much more interesting. Since the train was under 12 cars, it didn't clog Clermont's siding, making the operations less tiresome yet interesting.

Next time, we will operate the other freight train and see what it's worth. As Jérôme cleverly pointed out, the layout is quite small, with very little customers and trackwork, but he never gets tired of operating it. I think he nailed it: this is fun because we know what we do. Every single car in the train as a story, a place to be spotted, a real commodity to haul and a destination. At this point, we are so familiar with our concept that using timetable and switchlist is almost a redundant matter. I guess it would be good for outsiders, but to us, it means very little thing.

At the end, we reverted back to 1975 and run the passenger railiner up to Clermont. 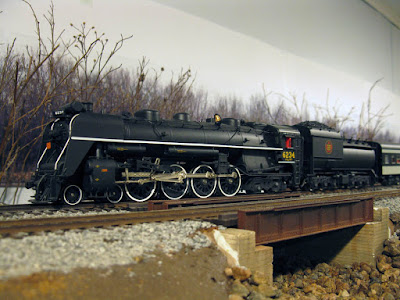 Finally, we unwrapped True Line's infamous U-2-g steam locomotive and coupled a couple of Rapido CN coaches to make up an excursion train as was common back in the 70s. Unfortunately, this locomotive doesn't run and need some serious repairs to make it serviceable again. To be noted, CNR #6060 did pull an excursion train from Montréal to La Malbaie in 1976. With Rapido's announce to produce a 606X locomotive in 2020, who knows what could happen!
Posted by Matthieu Lachance at 3:01 PM