I'm back to the drawing board! This time, to design a way to build Ciment St-Laurent loading facilities. While the building is rather spartan, its size (42" long in HO scale) and structure offer a structural challenge.

I have also to take into account how I will detail the interior and maintain the rails located right under the structure. Our initial approach was to build a single structure with protuding columns. While definitely feasible, this option has a few disadvantages. First, it's hard to make all columns sit correctly against the soil without having some small gaps. Second, the aforementionned columns lack bracing and are quite flimsy. It could be worked out though.

I'm exploring the possibility to break up the building in two parts: the structural columns and the superstructure. Columns would be inserted and glued into a sturdy base and connected together with a web of structural members similar to the prototype. The base could be scenicked and detailed while tracks could be embedded in the base. The superstructure would sit on top and could be removable for maintenance. It is quite more complex than the original one-part concept, but would ensure a more realistic approach. 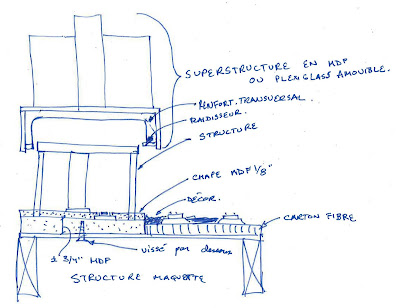 As for materials, no definite choice is actually made but whatever is used should be braced and sealed to some extent to reduce warping.
Posted by Matthieu Lachance at 9:26 AM