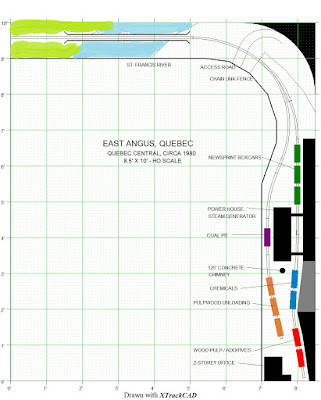 Since my last post, I was able to get some more information about East Angus that helps to understand how the plant was rail served. For this reason, and also because Roger Sekera wanted more details, I updated the track plan to reflect the changes in my understanding.

On the positive side, the new discoveries make this plan interesting for a larger audience since the track arrangement was unchanged from the early 1900s up to the mid-1980s. Also, it helped to make the concept simpler to implement and operate.

First, you will remark I removed altogether the staging track. It could be kept, but I felt it was a hard to reach gimmicl and wasn't truly required. This saved space to model the power house full scale. As it stand, very little compression was used. What you see is almost as close as you can get from the real thing.

On the map, the green cars represent newsprint boxcars to be loaded. Blue cars bring on plant the required chemicals (tank cars, covered hoppers, boxcars). Since the plant was using the kraft process, any chemicals suitable for your era can be brought in. Remember, that mill didn't handle all the process. The red cars are other boxcars, mainly for additives or for wood pulp depending on your era too.

The second siding is used for switching and storing extra cars, however, while studying the old map, it became quite evident the plant used to receive coal to produce steam. The purple car represent a coal hopper and the coal pit. It should be noted coal wouldn't be required in large quantity since the plant was mainly powered by hydroelectricity produced by a nearby dam on site. In recent years, if modelling a Quebec paper mill, you wouldn't need coal at all.

Finally, the orange cars are pulpwood cars. A shredder used to be located nearby the track near the yard throat. One could spot the car near the turnout if wanted. It would be more prototypical. In latter year, it seems woodchip and pulpwood were brought by trucks and trains, but at the other plant. Thus, after the 1970s, I believe it would be better to drop that commodity and keep thing neat at this plant.

So, as you can see, the East Angus plant is far to be a boring switching layout. Be it modern or old time, this one turnout industry is going to keep your crew busy for a while just as it was the case in real life.

Posted by Matthieu Lachance at 5:29 PM