Before presenting this other small layout idea, let's talk about a long time favorite of modellers: paper mills. They are definitely a staple on North American layouts and no wonder why. They look cool, generate a large amount of traffic and handle a vast array of commodities by rail (paper, pulpwood, chemicals, kaolin, etc.). However, to often I hear complaints from people who absolutely want one on their layout at any cost, ending up with ridiculous compromises that have much more to do with a caricature than a real mill. On the other hand, we’ve all seen these extremely large and bulky representations of such plant at full scale. They make impressive scene but are a pain to operate due to poor access. With that in mind, you end up thinking paper mills can’t be modelled in small spaces in such a fashion they can keep their interest.

A few years ago, Mike Confalone tackled the problem by only modelling the portion of the mill operated by the railway company when he did his St. Regis Paper scene. This way, he could get away with most structures and tracks, only representing the basic operations at the plant. On the other hand, you have people like Hunter Hughson who clearly decided to dedicate a shelf layout to the mill by including everything single activities on the plant. In that regard, I think he succeeded and I’m pretty sure it works as well as our Donohue mill, if not better. As it stands, our paper mill could work perfectly as an autonomous switching layout without requiring anything else in a 10’ x 8’ space, which is perfect for most spare rooms. From an operation standpoint, using an industrial switcher locomotive would be both realistic and would eliminate the need for a staging area since we could imply the local train left the cut of cars on a storage siding which is generally the case.

However, I wanted to see if I could model a realistic paper mill with less track and turnout. Something very simple yet grounded in prototype practice and that could offer a decent amount of operation while having plenty of modelling and scenery opportunities. And it seems I indeed found a suitable prototype in Southern Quebec that could give some people ideas. I certainly want to stress out this layout take as much place as Donohue and thus could look quite diminutive; however, it must be seen as an alternative for people wanting low trackage and to get away with runaround and switching puzzles. It is less about a race against the clock than working at a leisure pace. Thus, for similar space, freight cars, theme and era, one can develop very different projects with particular features.

Another interesting prototype in this series of quick layout designs is based on a paper mill in East Angus, QC. It closed recently and was considered one of the oldest still in operation in North America, dating back to 1882. A fun fact was that the original mill structure – a classic stone and brick building – still stands to this day and was still used to produce newsprint, kraft paper and other finer paper not so long ago. A second mill, on St. Francis River eastern bank was erected in 1892. By 1907, the old mill was renovated and pioneered the kraft process in North America, making it a more than worthy prototype to draw inspiration from. More information about this historic mill can be found in an interesting article from Sherbrooke Record published on March 14th, 2016.

The mill was served by Quebec Central Railway until the demise of this company not so long ago. East Angus mill was closed down once for all back in 2014-2015. Back then, rail operation was quite simple and only involved shipping finished products from a warehouse, some inbound chemicals and woodchip. Track density was low and rail-served structures would be easy to model without taking too much space.

An interesting aspect of this mill was that it was in fact, as we saw earlier, made of two distinct complexes built on each side of the river. While studying mandatory fire insurance and topographic maps, I found out the western mill was in fact the kraft and newsprint plant. To access this plant, a siding crossed St. Francis River over a steel bridge where a long siding served the mill both for incoming loads and for shipping finished products. A second siding, acting as a drilling track and probably to hold coal hoppers for the power plant in the old days stood there too.

Of interest too, the western part of the mill had only one siding serving the structure. No need for the usual vast array of tracks serving larger mills. This was due to a combination of factors including lack of space but also the fact a part of the process was handled by the eastern plant. Thus, it enables us to realistically model only a part of the process without compromising anything. Anyway, back in the 1970s and 1980s, it would have been normal that some commodities were trucked in, which for once, we can use to our advantage.

In terms of track plan and operation, this layout would be quite similar to Lance Mindheim’s one turnout layout project in MRH, except a second turnout would be required to stage the train behind the plant as if it was coming from the eastern plant. This staging would be optional, but I'm well aware that many people, even on switching layouts, like the idea their trains emerge from somewhere. With a switching lead of 66 inches, quite long trains (one 4-axle locomotive and 8 cars, which seems to have been quite standard in the 1980s) could be built up with enough space to perform realistic moves. Add to that the extremely attractive feature of seeing the locomotive run over the bridge several times during a single session.

As for the plant itself and commodities carried, maps indicate the mill handled the manufacture of kraft paper and newsprint. At the end of the track, most inbound commodities were unloaded in warehouses identified as “sulphite storage”. This is where boxcars and chemical tank cars would be spotted. At the other end of the mill, near the bridge, was the finished product warehouse. It wasn’t a fancy modern covered loading area but rather a more traditional set of doors along the siding, making it a perfect feature for car spotting. When the mill was later modernized, a steel warehouse was erected there. 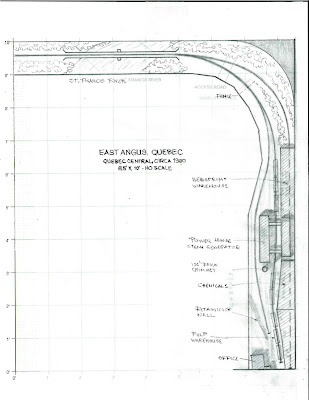 While being light on trackage, this layout would have an impressive ratio of scenery and industry. Switching moves wouldn’t be overcomplicated, but applying common railway practices would make it a neat challenge particularly since only one siding serves the mill. Personally, I would operate such a layout in the early 1980s, just before tracks were removed at the western mill to enlarge it. According to to a photograph shot in 1987 by Timothy Wakeman, Quebec Central ran extra trains to serve the plan. On the picture, we can see 6 boxcars and a tank car making up this train coming back from switching the plant and ready to leave for Sherbrooke.

Rolling stock would include a lot of colorful 50ft boxcars, some chemical tank cars and a handful of older boxcars. As any CPR line in Quebec, Alco road switchers such as RS18 and RS10 would be mandatory to perform the task and a caboose (Angus van) would make it a very pleasant sight.
Posted by Matthieu Lachance at 1:20 PM