I'm glad to report the CN orange ballast fleet is now done once for all and ready to enter service (when the paint will have hardened!). 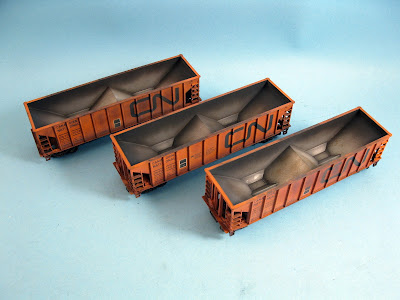 The last step was about weathering the interior. To be honest, I didn't go very creative and I simply followed some basic instructions outlined by Ted Kocyla from the Waterloo Region Model Railway Club. This article is interesting because it is dedicated to ballast hopper and how crushed stone create a different weathering pattern than coal which is acidic and causes much more corrosion. Basically, the interior was airspray with dull aluminium paint, then followed a coat of dark dirt paint on the higher parts where less abrasion occurs. Some PanPastel dusting followed to replicate some fresh rust and dirt. The model was then dullcoated to seal the effect. When dry, I splattered thinned down Burn Sienne oil paint to recreate the rust pitting typical of exposed metal. A last coat of Future and Tamiya flat base (about 3:1 ratio) was applied to seal and blend together all the effects. 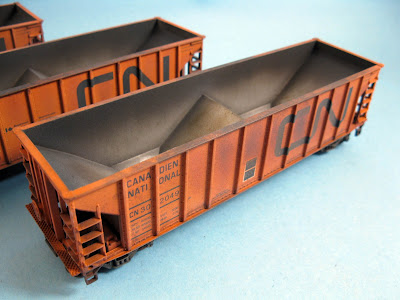 I've also been asked by fellow modeller George Dutka about more details related to the use of filters to modulate a base coat. This technique is widespread in military modelling, but rarely used on model railroads. Many of our techniques are somewhat similars, but I feel they are done in a more whimsical way than military modellers do and ofter, we make it much more complex than it should be.

As their name implies, filters are very light coats of color that are applied to a base coat to create slight variations of color. The goal is to tint the original color to create more depth and bring life to the model. It must be noted military modellers seem to categorize independently a lot of techniques we would put together under the generic word "wash". But I think they are quite right. A wash would completely flood a model to get an even coverage of all parts. This is what we do when we apply an oil paint wash over a model to get a grungy look. While very useful, this technique can get quite repetitive and generally fail to induce more subtle color variations. 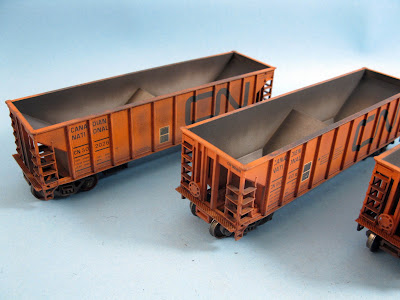 Many of you have probably seen many railway modellers highlighting freight car panels by locally modifying each of them. It can be used to replicate decoloration, warping, buckling or highlights/shadows. Some use powders to do that, which can be a real pain when dodging the lettering. While a legitimate method, it seems to be quite inefficient. I did it once and called it a day.

With filters you can do that in an easier way. Your goal is to create a very light tint by diluting a little bit of paint. The ratio can be as low as 1:20 as you will wish to build up the color . It can be done with acrylic or oil paints. Oil paints enable you to apply the filter with a brush and gives you time to work the effect a little bit before it dries. Surprisingly enough, since a filter is extremely thinned down, colors such as pure yellow, orange, magenta, blue or violet can be used and create subtle but impressive results. According to prototype references, you can uses various filters on different parts of the model to make details pop or create peculiar fading patterns. Also, ready made filters can be purchased on the shelves. They have the advantage to be consistent and many major manufacturers offer them.

Toronto IPMS has some helpful videos on YouTube about filters and other useful techniques. I must admit I can't thank Mike Cougill enough for pointing out this series of videos. This one covers what I did with my hoppers. They have many online clinics which are quite useful and I strongly encourage you to watch a few. Renowned military modellers Michael Rinaldi also gives some great advices in using oil paints intelligently so it makes your life easier and your model quicker to dry.


Has you can see, theses techniques are hardly ground breaking. But as Michael Rinaldi points out, it's not about "new techniques" but rather about how you can drastically improve the results by refining the way you do it. To often model railroaders weather with a heavy hand and rely far too much on pure luck instead of controlling what they do. I believe many of our methods are OK, but poorly understood and applied as a "miracle recipe". Some thoughts should be put in what we are doing and I'm seriously starting to believe we should start to shuffle some building steps, including the moment we letter our cars. As I previously said, we are making our lives much more complicated than it should be.

On a funny note, when I was talking about that with a friend who models wargaming tabletop figures, he pointed out that model railroading rely a lot on prepainted model, which he surmises made us forget to break down the assembly and painting process. To be honest, I think he has a good point. We indeed try to make our models look like factory built RTR stuff before thinking about weathering.

And by the way, don't get me wrong. I am fully aware many railway modellers have created fantastic weathering methods over the year and share their knowledge on various forums and social medias. However, as great their work is, I find it disturbing to see this knowledge barely permeate in the mainstream and is branded as stuff for "geniuses" and talented people when it has absolutely nothing to do with it. Wouldn't a long series of advanced articles about that kind of stuff would make the hobby much more inspiring than covering another generic basement filling Plywood Central that doesn't fit most people's life? Given you only need to sit at a table with minimum supplies to create masterpiece, I certainly wonder which subject would have a better impact of modellers self-esteem and feeling of actually achieving something meaningful instead of being crushed by pipe dreams.
Posted by Matthieu Lachance at 12:27 PM