Since last week, I've been unexpectedly busy designing track plans for other people. While layout design can be an excruciating process when working for ourselves since it is an highly emotional process often based on love for the subject and nostalgia, practicing this art for other is much more easier. 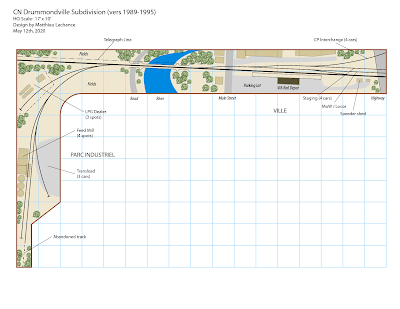 The reason is simple, since we don't have a personal stake in the process, we have more freedom to create hierarchies among design elements. With a clear mind, we have an easier time when it is time to compress or eliminate altogether elements that artificially impede the end results.

The first layout design I present today was commissioned a few months ago by André-Pierre Savard on the behalf of Groupe TRAQ in Charny, QC. The idea was to have a somewhat modern layout depicting a typical Quebec South Shore CN railway town and its vicinity to become part of Charny Station (soon to be a railway museum) permanent exhibit. I didn't give it much thoughts until André-Pierre revived the project yesterday evening.

We quickly agreed the project should take inspiration from well-known towns such as Drummondville and St-Hyacinthe while not trying to replicate a specific prototype. It was much more about capturing the sense of the place.

André-Pierre has grown to appreciate very simple track plans which give precedence to scenery and where elements have enough space to breath. Sharing a common vision made the design process quick and efficient. He gave me a set of elements he wanted and I'll credit him for not having asked for the moon but kept things well-balanced given the space available, which is a L-shaped 24" deep 17' x 10' benchwork.

Elements required included a VIA Rail passenger station with a large parking lot to model a bus terminal, a main street with grade crossing, an interchange track with Canadian Pacific Railway, a set of MoW sheds, a river scene with a substantial bridge and significant amount of fields.

In terms of industries, André-Pierre requested a feed mill, a LPG dealer and another one left to my choice. To keep with the theme, I went with a transload track, which were quite popular in the early 1990s a panacea to railway decline.


The goal was to have a fair representation of typical CN railway activities in Quebec so the layout could have also an educational value as a display in the future exhibit.

The design took only about a few minutes to create and maybe one hour to fine tune each elements. The biggest challenge being the benchwork will be made of 4' long modules. This meant I had very little leeway to place key elements such as turnouts. Speaking of them, as per my personal rule, I kept them to the strict minimum, below 10.


Basically, the concept is quite simple and strives to maximize how a train travel over the layout. The small leg is a somewhat low density industrial park where all the customers are clustered together. A large rural scene including the river creates a sense of distance before reaching the town itself. The main street and its houses are used to create a visual and physical barrier between the rural world and the urban one. This is not a new trick and in fact, it is exactly how the train enters Drummondville in real life. The large station and its parking look set the mood and also provide a neat foreground against which the trains can move. I recall Simon Dunkley suggesting such an approach for my Temiscouata project and feel he was right about this design being a way quite to how we interact with trains.

From an operation standpoint, a locomotive and its caboose are based in the town, on a storage track by the highway overpass. A pair of track represent the CP interchange and a CN siding which act both as a staging. About 8 cars can be hold there which is more than enough for this kind of layout. Once the train is built, our crew shove the train over the bridge up to the industrial park where switching moves are performed. Then, the train goes back to the town, set the cars on their destination tracks and the locomotive is take its resting place until the next day.


Many people would have probably added a runaround track in the industrial park, but I refrained for two reasons. Firstly, because it would raise the track density to an unrealistic level. Secondly, because a simpler track arrangement forces the train to travel over the bridge frequently, creating a dynamic and attractive visual effect that really make a locomotive shines.

From a technical standpoint, the layout will be built by Pierre Dutil which is a talented modeller based in Quebec City. His craftsmanship is quite high and his artistic sense well-trained. I have no doubt he will make his magic works wonder with this project though I will probably provide some elements, including a few structures.

Posted by Matthieu Lachance at 9:00 AM