After a few weeks hiatus, I'm back working on the pair of SWs. This project has taken a back seat due to a serious rise in my professional workload. It seems COVID-19 didn't impact that much my professional life, instead bringing more water to the mill.

That aside, like many such project, I was not particularly found of working on the next step: the handrails. I used to be quite a mediocre craftsman when equipped with a soldering iron and didn't want to commit myself working with brass and wire. But no one ever grow as a better person without fighting its own fear. 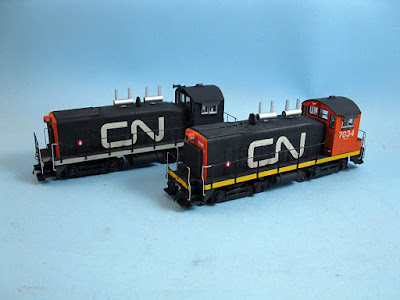 Cleaning the brass and phosphore bronze parts prior to soldering helped a lot, but you can't get away without tinning. I'm not a master, but I expected to get big blobs of solder that would require filing down. Well, it didn't happen. It seems when you do things right, soldering very small parts works well. Now I'm starting to understand a little bit better why some folks love to scratchbuild from that material.  Definitely sturdy and not so hard to work with. 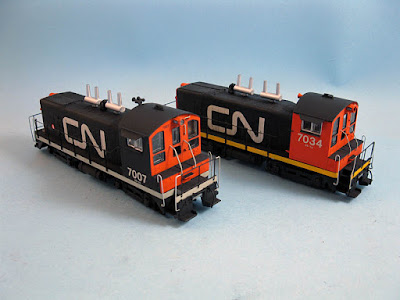 Once I had the handrails out of my way, it was time to paint and decal the units, which didn't take that long. Never been a fan of decalling, but with years of practice, I'm much more confident and less reluctant when facing that dreaded step! 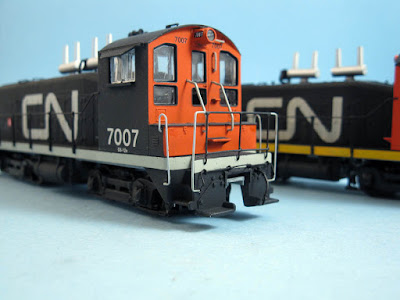 One must admit the 0.0125" diameter handrails look sharp and much to scale than the original Athearn steel wire. Improving the handrails was an effective way to make the model stand out. I'm seriously thinking about replacing the crude Atlas handrails out of my kitbashed RS18s. I hope to locate enough Precision Scale stanchions before they no longer exist. 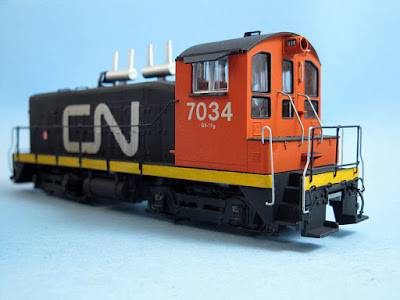 So far, the locomotive shells are almost complete. Some paint touch up with be required and rerailer will also be added to a later date. I'll also have to create new headlight lenses where the original ones are missing. But the big challenge will be to improve the motorization. I've already ordered some 5-pole motors. I've checked up remotoring kits by NWSL and other manufacturers. I'm not sure how someone can pretend a 5-pole motor is worth that much, but let me say it politely... I'm pretty sure if it was the real retail price, most model railway manufacturers would either ask ludicrous prices or drop some details out of the shell. After watching a few videos comparing the performance between high-priced motors from "reliable" sources to cheap made in China equivalent motors, it became apparent the supposed knock off weren't not only equivalent but often outperformed the higher end item. 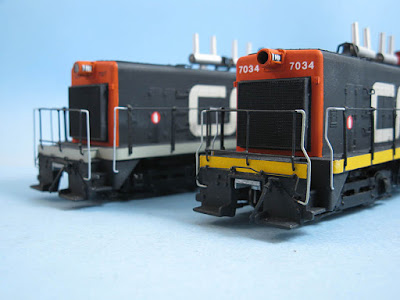 Honestly, I've not reached that point where I believe paying anywhere between US$22 to well over US$80 on a motor kit is well-spent money, particularly on a pair of cheap Athearn BB locomotives. With that money, I could simply purchase pre-owned Proto 2000 locomotives and have field day. Or even better, keep that money to buy a better model that will be more useful or fund quality track and turnouts for the next layout. I know many will tell me how the cheap motors from Ebay aren't good enough, not durable and will burn after a while. Let me just say a prominent Canadian manufacturer made itself quite a unenviable reputation by equipping its high-quality model with $2 motors and it didn't stop their fanbase to gloss over that fact.

As for durability, I've seen people using these motors for 2 years now, on models used extensively on a weekly basis, and still getting reliable results. At that point, it's not a matter of being cheap, it's just a matter of recognizing where worth is. I'm not spending over US$160 to remotor a pair of locomotives that will likely end their lives as shelf queens!

When the remotorization will be done, I'll make an update. Until then, I'm not planning to weather the locomotives having learned the hard way it is better to sort out the mechanical aspect of a model before applying the final touches.

Posted by Matthieu Lachance at 11:29 AM