If Villeneuve was Beaupré... a Second Look

If you wonder if I'm still modelling, the answer is yes. Less than I wish I could due to a serious load of professional work, but enough to surprise a few ones real soon. I'm bringing back a piece of local history to life, but wish to keep it a surprise! Only a few few select people are in the known since they share a common nostalgia with me with that specific object and they helped me gather data.

And now for something less whimsical yet grounded in several of the same things! You recall (yet again isn't it) that about two years ago I raised the question about the future of Villeneuve on our Murray Bay subdivision. At that time, I mentioned I wasn't particularly convinced this scene was the right one for our layout. It became even more apparent as we modernized the layout toward from the 1980s to the early 2000s. The anachronistic nature of Villeneuve which cement plant closed in 1997 didn't sit well with me. Also, I was never impressed by the nature of operation there. Cool in real life, somewhat boring in miniature. Not everything scale down isn't it!

Another thing that I hate is how we don't feel the train is travelling in Villeneuve. It seems having D'Estimauville right after Villeneuve when it is a few miles away kills the trick. In Clermont, we only have one continuous scene, but the train seems to really travel a few miles due to that. The immersion is total. In a few words, that entire part of the layout seems contrived, lack unity and is basically underwhelming. 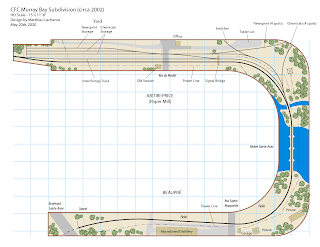 I'd say having designed and redesigned a few layouts in the last few weeks really has sharpened my eyes toward Villeneuve. From my last attempts, a common theme I tried to develop was the impression of a continuous scene telling a simple yet compelling narrative. Monk Subdivision was such an exercice, the Groupe TRAQ's several competing designs too, also the work done on a reader's track plan to improve an existing layout and even the funny little twice around design. Discussions with other model railroaders really stressed that finding a balance between operation (or rather, interaction with trains) and telling an immersive story was a key element to make a layout full of life and soul.


By replacing Villeneuve with Beaupré - another paper mill town - I feel we can truly bring forward the true nature of railroading in Charlevoix. Two big mills kept the life economically viable, they both were full of action and located nearby interesting features such as a large river. One was a terminus in a mountainous valley, the other one was a town along the line build in a rich plain. Same theme, but a different approach.

Both had to use industrial switcher locomotives to complete the job, yet they had different needs. In Donohue, woodchip and liquid chemicals were a staple in paper production while in Beaupré, they sourced their woodchip locally and mainly received dry additives in covered hoppers.

Also, Beaupré with its large 4-span bridge lend itself naturally to the room. Acting as a scenic point of interest, this bridge divide each side of the aisle: one dedicated to simply running, while the other is the plant. Also, the large river acts as a focal point when entering the room, creating a point of interest where now there is none.

Another positive aspect is the nature of Beaupré. Since the mill was far away from the track, no need to model it per se. Given the ceiling is really low in this room, we don't get the weird effect of having the cement plant almost touching it and creating unsightly shadows.

Finally, Beaupré is accessed by a modern concrete tunnel under an highway. This exactly like this in the prototype and on the other side lies another town, which isn't modelled. This, it is a natural barrier to end a layout and create a portal toward the outside world. D'Estimauville, while a visually charming place, always lacked a bit of personality. In Beaupré, there was a large abandoned distillery, which provide a glimpse that the railway used to be much in use in the past, but lost a few customers over the years. This helps to ground the narrative that Beaupré is an industrial town that was able to develop with the help of the railway, making a stronger story than splicing clumsily Villeneuve and D'Estimauville.

Indeed, all that is a bunch of ideas, but I would be quite interested in build a small mockup to see if there is more than meets the eye or if this is just a bias on my part. But just having a large bridge were trains doing switching have to cross a few time per sessions is already a great feature I love to see on a layout. This old YouTube video may provide a glimpse at what was a common occurence on CFC during the 2000s.

Posted by Matthieu Lachance at 4:46 PM