After some discussions with Groupe TRAQ members, it was decided to explore a simpler yet closer to prototype proposition for CN Drummondville Subdivision.

It was my first idea, but I shelved it because I thought some more tracks in front of the station would provide some visual interest. In real life, track arrangement in front of Drummondville station was quite simple save for the presence of a diamond.

You could say the diamond defined a part of the scene because the station had an annex that was perpendicular to serve the CPR line. Why not try this on a layout? 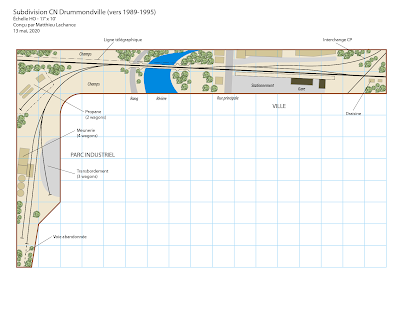 Interestingly enough, the new proposition is based on real life dimensions, meaning the station is correct and the diamond is exactly the right distance from the grade crossing. Better, I found a picture showing the local train locomotive and caboose used to be parked on the small siding in front of the station. Given Groupe TRAQ is a railway historical association, I feel it fits better their mandate if Drummondville is closer to what it used to be.

Meanwhile, I was also asked to create another unrelated layout using the same footprint in the case Groupe TRAQ would add a second shelf. This time, the request was simpler: a paper-related industry to run some CN woodchip cars and a cement customer to run Ciment Québec covered hoppers.

I quickly elected to take inspiration from St. Lawrence & Atlantic Railway on ex-CN Sherbrooke Subdivision in southern Quebec, not far from Drummondville. Back in the 1980s, when it was still operated by CN, a new paper mill was built on the hills near Windsor, requiring a quite lenghty industrial spur to reach the plant. At a nearby grade crossing, a somewhat spartan transload facility dealing with chemicals and cement was located. Basically, a shelf layout dream come true. 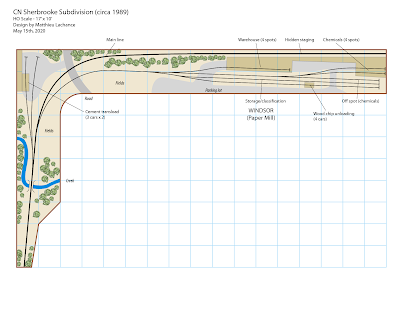 It didn't take a long time to piece together a basic track plan directly inspired from the prototype. Since the paper mill is quite modern, it doesn't feature complex and byzantine track work, but a very efficient layout. I thought it would be perfect.

Some readers will find an uncanny resemblance with my East Angus layout design and it is true. However, this time I feel I was able to implement my old idea of implementing an hidden staging behind the plant itself. This gimmick has two goals. First to create a plausible impression the train is coming from the outside world and second, to double the time and distance to reach the paper mill. Indeed, you have to move from one end of the layout to the other, then throw the switch and come back on a different track to your origin point. It seems to me to create a better flow of movement will optimizing the use of track and space.
Posted by Matthieu Lachance at 6:18 PM