As I move forward to build the layout (a water pipe must be rerouted this weekend before construction begins), a last scenic issue as to be addressed. You probably recall I removed the tentative lower line a few weeks ago. However, I didn't address what would happen with this layout area.

The first option was to extend the scenery East of Monk a few feet. It would represent the first few hundred feet of Glendyne Subdivision toward Edmundston. I envisioned either a wooden area or a marsh like Lac-Therrien. However, I didn't feel it was right at all. A question was raised: what's more important? 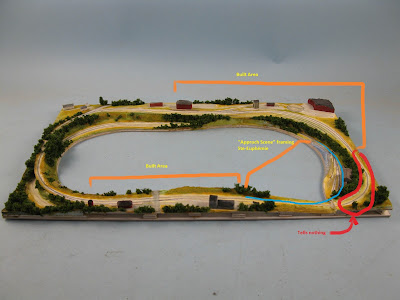 Trying to answer that question left me to analyse the small mock-up once again. One thing got on my nerve and it was how sudden the transition from staging to Ste-Euphémie was short and sudden. I feel it's better when a scene has buffer scenic zones on each side so you can prepare yourself when your train is arriving. I do recall Lance Mindheim suggesting to keep at least 2/3 of the layout for what he called scenery zone only areas. Also, a long scenic curve on a grade before reaching the town would be a great way to display locomotives working hard to reach their destination. 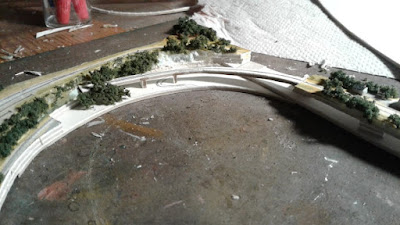 On the other hand, I felt adding track East of Monk added nothing to the game... a simple mainline disappearing behind a tree line would be more than required. So I decided to make the connection to the staging visible which added about 6 feet of mainline West of Ste-Euphémie. I still had in the back of my head this idea to replicate a classic NTR steel viaduct on the layout and that area would be perfect to frame it. After careful measurement, I found out I could replicate an almost full scale rendition of Rivière des Abénakis bridge on a 52" radius scenic curve. The bridge itself would be made of three deck girder spans for a total length of 27". We are talking about something substantial here. What I also liked about this bridge was the large yet shallow valley is crossed, enhancing the horizontality and making the scene appear longer. While the bridge is quite long (about 230 feet), it spans a very small river, which also helps to blend it into the layout without overwhelming other scenes. The valley was also full of trees in later years, which made the bridge harder to see through the vegetation. That game of visual hide-and-seek is attractive to me because you hear the train, see it a little bit, but it's never in plain sight. Generally on layouts, we like to make the bridges highly visible, but in this case half hiding it is the goal, to enhance that feeling of distance and remoteness.

With this small scenic issue out of the way, I'm ready to cut some wood!

Posted by Matthieu Lachance at 8:22 PM