A great thing about the B-A fleet was its great diversity in terms of car types but also of paint schemes. At least three major designs existed: the old plain one without logo, the bow tie logo (pre-1948) and the roundel logo (post-1948). But in reality, these paint schemes had many, many variations and tracking them down is quite a challenge. Fortunately, some websites such as Nakina.net helps a lot to track do the numerous B-A variations that existed.

What I believe to be the original B-A paint scheme was quite spartan. It consisted of a black car, with no logo and the company name spelled on the left side in gothic (block) lettering. Not a lot of picture of this scheme exist since it was phased out quite early and replaced by the bow tie logo. However, even the bow tie version kept the lettering in the same place, only adding the logo. The old time Roundhouse tank car is a good example of this early plain scheme. 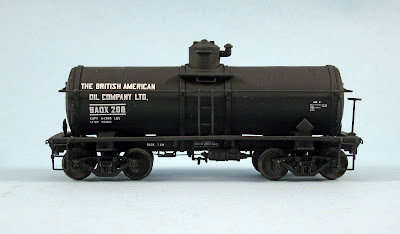 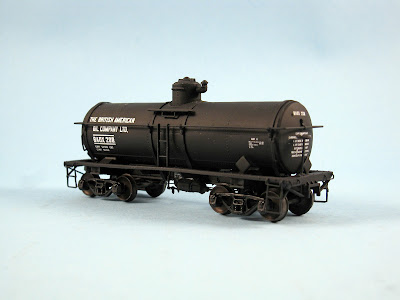 The second paint scheme sported the "bow tie" logo which predated the introduction of the roundel back in 1948. Photos of these cars are rarer online and most show a certain level of weathering and paint peeling that leave us to believe they were already getting old by that time. The sheer number of roundel logo tank car pictures online leaves me to believe B-A was quite pro-active when they phased out that design. This Tichy 10,000 gallons tank car is a good representation of a typical bow tie paint scheme applied in the 1940s. 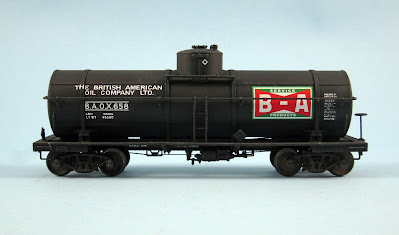 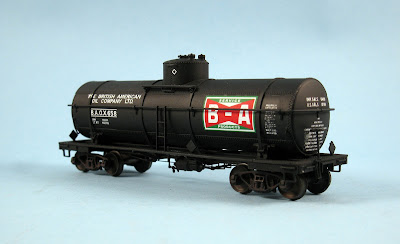 It's interesting to note that Black Cat Decals has a set for this particular paint scheme, but when you research the suggested car roadnumber, you find out it was a silver/aluminum tank with black lettering and not a black one with white lettering. Bachmann recently offered a somewhat passable HO rendition of that car. Wanting to model it, I decided to simply redraw the artwork by scanning the Black Cat decals to get a template. All lettering was redone from scratch in Photoshop and printed on decal paper. It was time consuming but quite rewarding in the end. To be noted, this car, like many B-A cars, didn't have any dome platform, ladder or grabiron. 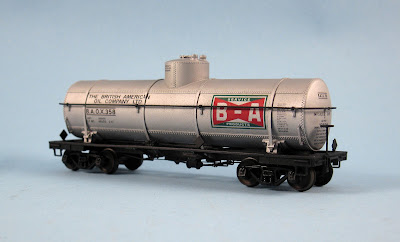 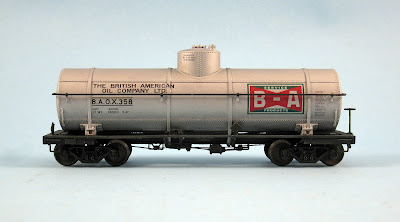 Finally, the most popular paint scheme was the bicolor (black & green) roundel design often replicated by manufacturers on foobie cars. However, not all black & green cars were similar. Since very little color photographic evidence exist, you have to train you eye to see the faint tone demarcation on B&W photos which can be easily misinterpreted as railing shadows. The roundel paint scheme started in 1948 with full black cars with the new logo in place of the bow tie one. This Tichy 8,000 gallons tank car gives a good idea of a typical car in that scheme. The full B-A name was still painted on the left side. 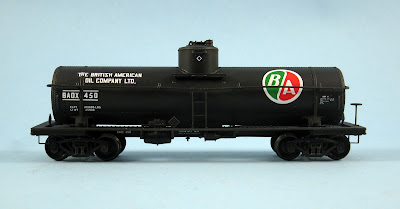 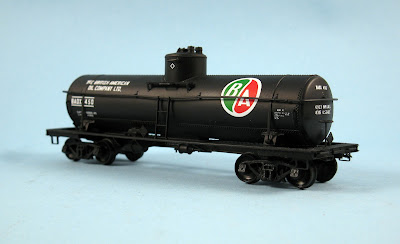 It seems not longer after this scheme was introduced, the full B-A name on the left side was dropped. This practice however doesn't seem consistent and the name could be seen later on black and green cars. That's the beauty of the B-A tank car fleet, it's subtle variations on a same theme. Here, a more streamlined roundel black paint scheme can be seen on the 3-dome tank car. 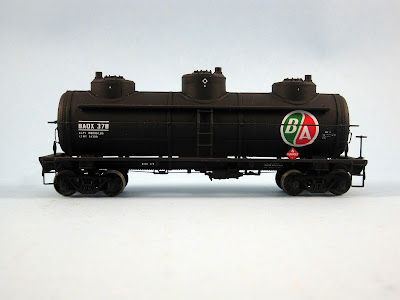 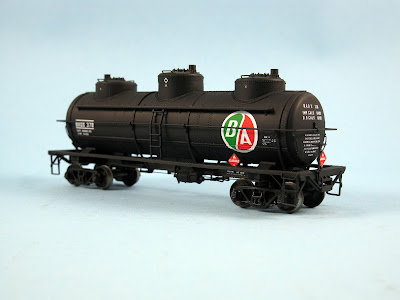 Later, probably in the very early 1950s, the roundel paint scheme evolved into the familiar and often copied bicolor black and green tank cars. The half bottom and ends of the tank car were black while the top and dome were green. It is very hard to figure out the exact shade of this green because most pictures are black and white. Even on old color pictures, the green sometimes look black due to color shifting. If you look carefully at old pictures however, it is evident the shade of green was different than the bright green used on the roundel logo. My best guess is that the dark olive color seen on many RT models isn't too far from reality. After a while, I settled down on Tamiya XF-5 flat green. It's color complement perfectly the logo colors while not looking to olive drab. As an educated guess, I consider it to deliver visually pleasing results. This Tichy 10,000 tank car show the scheme in all its glory. 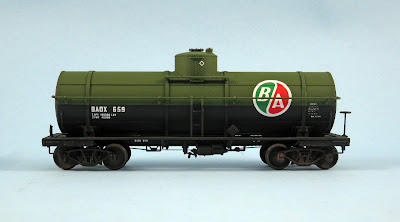 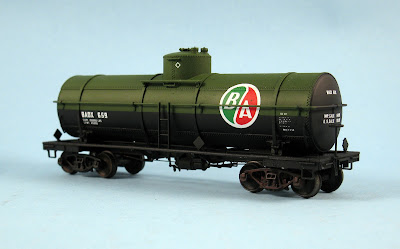 Then, the last iteration of the classic B-A paint scheme occurred in the early 1950s when a silver/aluminium stripe was applied on the tank between the black bottom and green top. From that time on, the roadnumber and reporting marks were painted on the silver band in black paint. My not-educated guess is the new scheme was developed when B-A received their new modern welded large capacity tank cars from ACF in 1952. This is my own working hypothesis that should be researched and substantiated by dated photo evidence and other sources, but it would make sense since that type of stripes is easier to apply to welded tank which didn't have as much rivets and steel straps as the older ones. Nevertheless, it is a very attractive paint scheme and by 1961, when the B-A fleet was dissolved, it had been applied to many car types. Here, you can see it on a classic Tichy 10,000 gallon tank car. 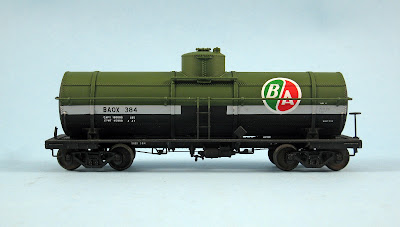 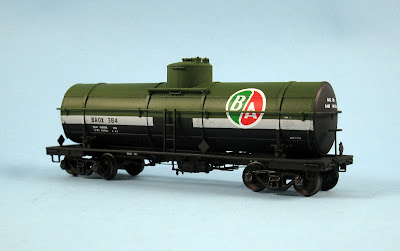 And finally on a more modern Athearn 12,500 gallons tank car on which we can better appreciate this clever and slick paint scheme design. You will remark the stripes are cream on that car which was painted a few years ago. The reason is because back then, very little information was available and most people, including myself and Al Ferguson from Black Cat Publishing, took their cue from a heavily color shifted color slide which fooled us to believe the stripe was cream and not silver. Only later, new pictures surfaced and older railfans pointed out the mistake. Since then, Black Cat as revised their decals and provide the correct set of silver stripes. 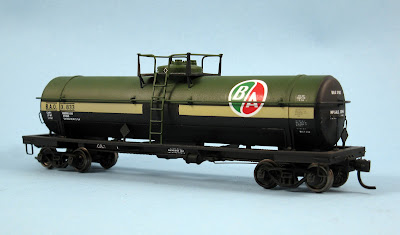 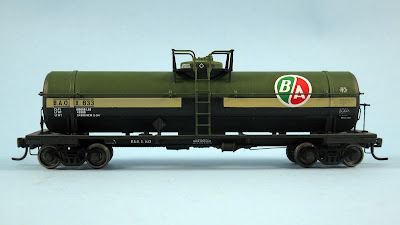 Edit: As I became aware of new photos this morning from the T. A. Watson collection, it seems B-A repainted its fleet on a regular basis. Many pictures show the same cars within a few years intervals and it's easy to see that when the corporate image changed it quickly reflected on the tank cars. Moreover, cars with relatively "recent" paint schemes are updated rather quickly as one can see the full B-A name disappearing in favor of the more modern silver stripes version, even on very old cars.

Posted by Matthieu Lachance at 10:29 AM