This series of articles will be divided in two parts. First, about how to model various B-A tank cars from readily available cheap models, and second, about replicating the numerous variation of their attractive paint schemes.

Holidays are a perfect time to work on long neglected projects. Many years ago, when I comtemplated the idea of building Avenue Industrielle layout, I acquired a few decals and tank cars in hope of creating a British-American Oil tank car fleet to serve their local distributor in downtown Quebec City. The plan never came to fruition and the models stayed in my drawers for years.

Having recently built six old Proto 2000 Canadian Petroleum Tank Line cars, I thought it would be a logical step to completed the old B-A project. To do so, I had one Intermountain 8,000 gallons car kit, four Tichy 10,000 gals. kits, an derelict Roundhouse Old Time 6,000 gallons car and several old Athearn single and triple dome cars in various fantasy paint schemes.

A quick search on nakina.net database showed me the old Roundhouse kit could replicate a very old 6,000 gallons car still in service in the 1950s. I initially planned on using this kit and 3D printed parts from Shapeways to make a prototypical UTLX car, however, the 3D parts were so warped and brittle, I decided against it and move forward with the B-A idea. A heavily shortened and narrowed Athearn tank underframe was used to complete the project, with various Tichy spare parts. 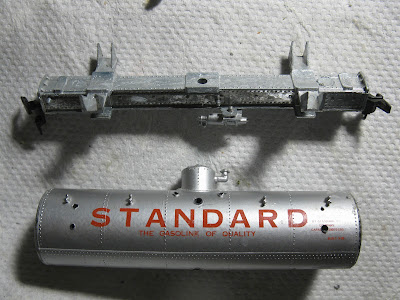 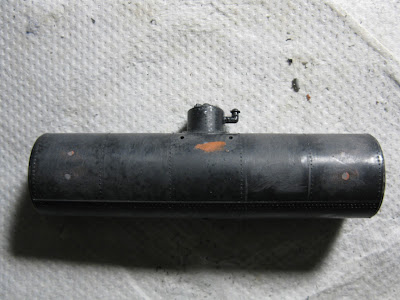 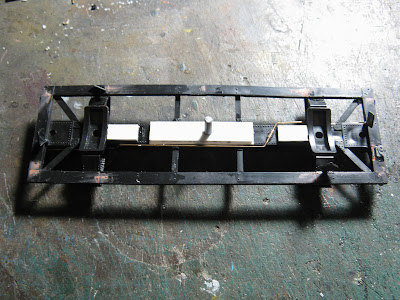 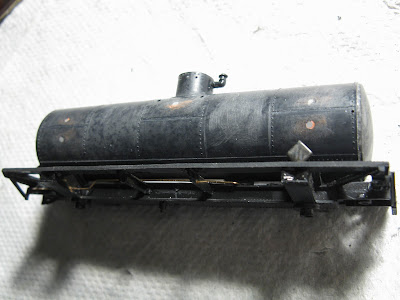 As for the infamous Athearn 3-dome tank car, I discovered it could be shortened to a 10,000 capacity to fit a class of tank cars used by B-A. Interestingly enough, the B-A car had a taller center dome, which was done by grafting a second dome on it following Tony Thompson's method explain on his blog. Once again, several spare Tichy parts completed the cars. You will immediately discover I ditched the ubiquitous Athearn's railing, metal ladders and stirrup steps in favour of more prototypical versions.

Shortening a model with a razor saw is never an easy task when it's shape is both cylindrical and have no flat surface to square it against the miter box. However, by gluing stripes of styrene where you want your cut, you can make perfectly square cuts. Both easy, cheap and efficient. Very minimal sanding was required to splice parts together and no putty was necessary to hide the joint as melted styrene oozed out the joints. 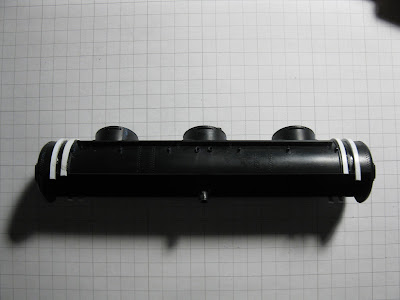 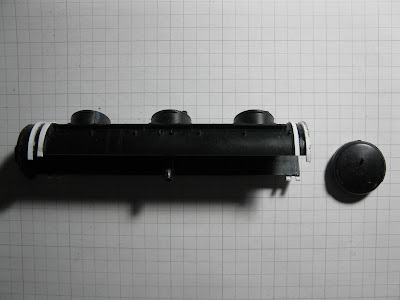 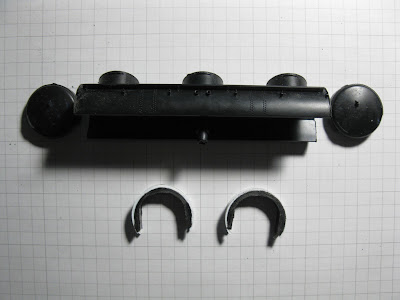 The Tichy kits were built as intended by the manufacturer, but with some hindsight, I should have followed prototype pictures of B-A cars to be closer to their appearance. It means some platforms would have been removed, steel bands located elsewhere, rows of rivet sanded down, etc. This is unfortunately the kind of details you often discover later during the painting process. Live and learn!

I don't know if I will ever build more B-A tank cars, but during my researches, I found out the notorious Athearn chemical tank car, which is well known to be extremely flawed could be used to replicate B-A series 976-995 12,500 gallons tank cars built new by ACF the early 1950s. Keep in mind the old Athearn tank cars are all based on an ACF-built SP 12,500 gallons car. The biggest modification would be to replace the small chemical dome with a larger one (Tichy or Athearn or anything else to that matter).

The old Athearn chemical tank car could also be used for the CC&F-built series 701-765 cars that had also a 12,500-ish gallons capacity. Once again, the dome should be replaced with a Tichy one and the underframe substantially altered to replicate typical details found on CC&F cars.

Another project would be to try to replicate a bow tie scheme 6,000 imperial gallons (about 7,200 US gallons) 3-dome tank car using a WalthersMainline 36' 3-dome tank car. Walthers don't mention a specific prototype for this car, but it has typical ACF underframe construction details and the tank seems to have a 8,000 US gallons capacity. Given empty space exist between compartments, I suspect the real capacity is quite close to the B-A car capacity. This car would require improved details to look good, but it's quite doable.

A crazy idea would be to salvage IHC old time tank and mount them on more modern frame. It would be quite involved, but could produce a range of fascinating and very old B-A tank cars. Series 210-222 comes to mind with their small 5,2000 gallons capacity and high dome. Interestingly enough, these cars were later repainted in the most modern paint scheme with the silver stripes and roundels.

Finally, in the more expensive range of cars, several Tangent tank cars car be used to further the possibilities. Their 8,000 and 10,000 gallons 1917 radial course tank cars would be an excellent base for many older B-A tank cars while their 3-dome General American car would provide a neat alternative to bashing a crude WalthersMainline model.

I don't know if I'll will ever proceed to build these cars, but the prospect of doing so is exciting and fascinating. It's extremely satisfying to bring to life such an old fleet of Canadian cars in model form! Here is a more comprehensive list of what could be done:

Posted by Matthieu Lachance at 10:28 AM