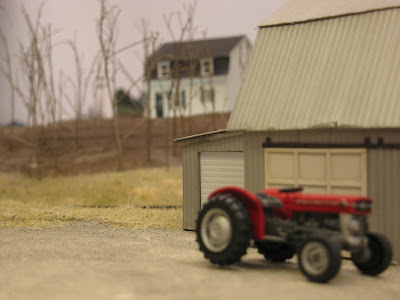 The Second Empire cottage is nearing completion, only requiring me to add the steel chimney and add some weathering to tone done the stark black and white contrast. Even if the model isn't complete, it didn't stop me from trying it out on the layout to see how things will fit together.

As a matter of fact, the cottage will be the house the further from the fascia. It will be mainly seen from the back, on the other side of the peninsula. This was my goal since the beginning to have a structure that could be seen from both side. It helps to create a sense of depth.

I once tried to place a square two floor house there but it didn't look good. It was too tall and didn't create a decent transition toward the back side of the peninsula. In this regard, a mansard roof is perfect because the house can still be somewhat tall, but the roof design makes it look much more smaller.

With that out of the way, it became also evident the old Life-Like cottage could stay on the layout. Its style was acceptable, but the proportion are far too small. This house is about 20ft wide, which is seriously ludicrous. Such a large cottage would generally be at least 24ft wide in real life. Not that 20ft wide houses are uncommon, but to keep a sense of homogeneity, I felt it was better to scratchbuild something myself. Also, it will give me an opportunity to make sure all the structures share the same level of detail and craftmanship.

As a matter of fact, the new house is already build and ready for painting and detailing.

Posted by Matthieu Lachance at 7:00 AM