The modelling season once again started after an impromptu hiatus during the Holidays. It's a little bit refreshing to put Erie projects aside for a while and work on something that's real. After two days of modelling, we have made substantial project.


The first one is Henri-Bourassa boulevard overpass near the staging area in Maizerets. I drafted a set of plans while on vacation and Louis-Marie is now cutting all the required parts. As much as this viaduc is quite simplistic, trying to capture the fell of the real thing requires a bit of creativity. But once again, Louis-Marie and his godly table saw and jigsaw amaze me beyond work. He managed to make these neat V-shaped pillars within less than a .25mm error margin. Quite impressive.


The second project is finally building the Dominion Textile plant as we should have done many years ago. We have acquired over the years an impressive quantity of useless brick structures and parts. The best candidates for kitbashing are Atlas Middlesex Manufacturing Co. kit and Walthers now-discontinued Modulars walls. We had to use a little bit of modeller licence to get the building look right, but we are now satisfied it captures the prototype nice late 19th century character. The italianate staircase tower is going to be a beautiful feature.

However, I'm in a pinch since Walthers modular walls are discontinued since a long time. I searched the web during two days with finding any remaining stock. So, I take a chance and ask fellow modellers if they have any unused remains at home. It can be complete kits or simply leftover parts. The required parts are: Walthers Cornerstone Modulars Large Walls w/Single Large Arched Window 933-3734 and Wall Columns & Caps 933-3725. 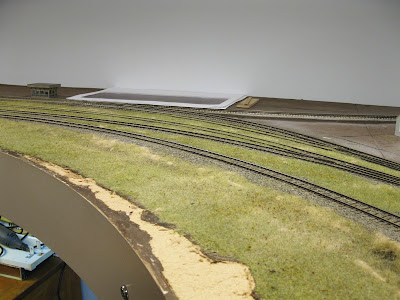 Finally, the third project was to complete grass application over Villeneuve tracks. Using pictures of the era and videos, I was able to determine quite precisely the extent of vegetation over tracks. Only the mainline was clean, the rest was slowly sinking into mud and grass. Just to give you an idea, the grass covered surface is about 16 square feet. However, it only took two hours to do that after I figured out a way to put the glue on efficiently. 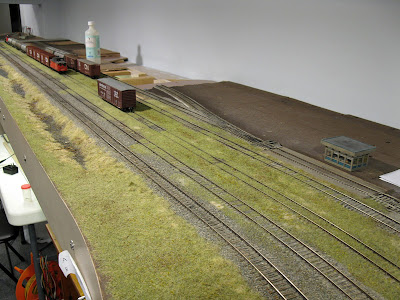 At first, I used a brush to spread diluted glue over the area to cover. It took a lot of time yet the contours didn't look natural. Next, I tried with a pipette, which was again a foolish attempt has it delivered very little stuff at one time. Then, I saw the light, took my yogurt container full of diluted white glue and carefully poured it over the ballast and the track where I wanted it. Since the ballast isn't absolutely regular, the glue found its way in all the depressions, creating a natural contour. An unexpected by happy effect was the glue soaked the ballast between the tracks too. 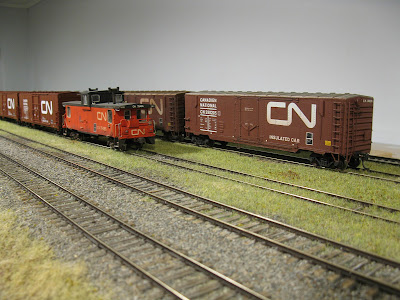 I can now consider the grass in Villeneuve trackage done. when Alkem chain link fences will be installed, small bushes will be added to bring some more life in the scene. 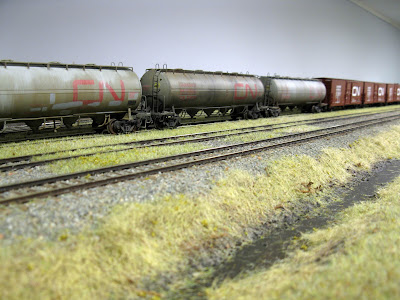 Speaking of life, we also made a mock up of the residential area that still exists near the cement plant. Using Google Earth and old kits, we were able to define better the property lines. Quite frankly, we were surprised to see some houses to be built so close to the track, at the point that one house's deck looks like a passenger station pier. 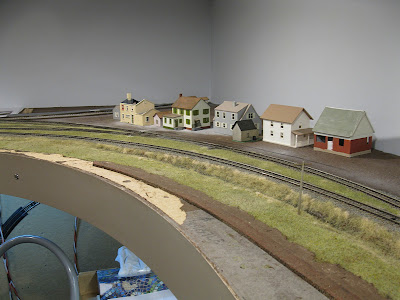 Unfortunately for us, all these houses will have to be kitbashed since I couldn't locate any two-storey high flat topped wood apartment house. Simply put, these houses are simply boxes with windows and doors!

Posted by Matthieu Lachance at 10:04 AM