Modelling a Junction: An Updated Concept

For some reasons, I spent December 31th painting and building freight cars for Harlem Station while revisiting the interchange layout I was working on. Though these designs have probably no chance to see the light, I find the process amusing and I always learn something while doing so.

With this first concept, I ask myself what would become of this layout if it was located in a small 10’ x 12’ room and incorporated continuous run capabilities. Also, I thought it could be set in the steam era just for fun. Then came the idea to base the design on Erie, PRR and NYC. Mind you I didn’t bother with any prototype and used my common sense railroad knowledge. It was a matter of setting the flavor and having a good reason for double mainline and important junction. As a matter of fact, when I later checked up old Erie track diagrams and Morning Sun books, it became apparent I nailed what used to be a common sight on Erie (and any railroad in North America).

Basically, the layout represents a small town located at an interchange between a major double mainline (imagine Erie New York-Chicago trunk line) and a small feeder line that probably link some other railroad, probably PRR. I drew inspiration from areas in Pennsylvania, including the large bridge over Erie tracks in Corry and Erie’s nearby branchlines.

Now, imagine you start your session with an 8-car freight train pulled by a 2-8-0, it could even be a mixed freight if you want. The starting point is somewhere near the liftout bridges and you run “eastward” crossing the large arched steel bridge over a PRR main line. Once in town, you take your orders so you can pull and set cars on the interchange with the trunk line. Once done, you can start switching the various industries before calling it a day, reversing the loco on the turntable, fueling the tender and preparing yourself for the trip back to your originating point. Nothing complicated, but nothing boring either. The operation involves many different moves and can quickly get time consuming.

The layout itself is built around “vignettes”. It’s a figment of my imagination. However, it tries to incorporate stuff that would make sense back then in one single town. You basically have the “Junction”, the “Depot” and the “Countryside”.

As for the industries, one large plant exists near the interchange where it is logical to find it. With its 5 different car spots, it requires planning to be served adequately. The other industries are a bunch of classic small town customers found in any rural district. While I put a few on the track plan, they could be anything else and organized in a different manner. This is the kind of stuff you adjust while building the layout. But generally, stuff like a feedmill, a grain elevator, an oil & coal dealer, a freight shed or a lumber yard would do the job. Using valuation maps or old photographs of a real place could help.

Then we have the station’s team track. It could be an interchange with another branchline or connecting road… or just a track behind the station where you can handle all kind of freight. The “behind-the-station” team track used to be a common sight not so long ago and it always looks good on a layout. Once again, the modeler will have to decide for himself. As for me, I’m up to keeping things simple here. I consider one long team track would be quite enough. I imagine a few LCL boxcars there, maybe a small loading ramp and a few coal hoppers with a conveyor.

The engine facilities are Spartan. The reason is simple; Erie was converting to diesel quite fast in the early 1950s. By 1952, only a handful of steam locomotives were on revenue service. Thus I consider the facilities have been demolished to a great extent few years ago, only keeping the weed-filled turntable, the steel water tank and water spout. One could add more structures like a tool shed, but I feel keeping things minimal will make them believable. Also, a smaller facility can be blended easily into the surrounding scenery while dealing with a roundhouse can be a slippery road.

In that regard, Don Hanley recently commented on MRH Forums about Jim Six's layout that:

"Small turntables like ones the photos you posted were not limited to end of the line. The Erie used these to turn the locomotive of the locals at the end of their run so they could head back to the appropriate yard. I suspect that in the time period you are modeling there would be recycled turntables scattered along the line of just about any railroad for the same purpose. I don't recall ever seeing this feature is modeled on layouts I have visited. and it's a shame. Turntables do not need to be limited to the terminal area only as most model railroaders seem to do."

Don's comment also listed a few recycled small turntables that were located near interlocking towers and junctions along the Erie mainline, in a same fashion as implemented on my layout. Once again, I certainly share Don's view that lone turntable in the wild are one of the most underrated element in model railroading.

From a scenic perspective, most areas would be surrounded by fields, woods and fences. I would keep things mundane as much as possible. However, the junction with the trunk line would be a good place to go forward with detailing and signaling (probably dummy but functional). Also, on the other wall, I added a long steel bridge over a marshy river. This kind of scene is generic yet always powerfully evocative. It could also be replaced by a low wood trestle, a stone culvert or a concrete underpass.

You’ll notice I try to keep grade crossings at minimum. While they are interesting visually and during operation, when you have too much of them on a very small continuous loop, they quickly get tiring. Better build a great one that becomes a railfan spot than multiply mediocre ones. It’s the reason why I prefer to install a small wooden overpass on the liftout section to work as a scenic divider.

Finally, I designed the layout in such a way readily available items could be used. The reason is that most modellers don’t have time to do everything. As much as I love replicating prototypes as close as I can, we all face limitations. Since this layout isn’t based on nothing real, I think it could be built using commercial parts. Tracks are PECO code 83 so there is no need for ugly ground throw or motors. Curves are large and gentle to ensure smooth operation and realistic appearance, mainly about a 36” radius on average. Buildings are mainly picked among the Walthers Cornerstone series. While I generally get sick seeing these buildings everywhere, a few of them are so grounded in real life prototype they do the job neatly. My personal choice would be the Golden Valley depot, the interlocking tower and speeder shed kit (which provide grade crossing gates too), the small concrete coaling tower, various rural customers (oil dealer, grain elevator, stock pen, etc.) and their team track accessories kit. Walthers brick industries or DMP modular parts could be used to build the large plant. A brick chimney could be added. Oil tanks and road overpass could be built using Rix Products offerings while the large bridge could be Central Valley 200’ long arched bridge which would make a beautiful and challenging model to build. Other Central Valley, Microengineering or Walthers type of bridge could be used too. Add a Tichy steel water tower and a few non-working signals near the diamond and you can call it a day.

While I certainly suggest commercial components, the modeler should try to improve and customize them. Credible paint job, careful weathering, small details, slight modifications and kitbashing can improve many models. This is generally the level of work that most people find enjoyable and rewarding without taking a lifetime.

As you can see, this is not prototype modelling. However, it is grounded in prototype practices and even if it is a figment of my imagination, this setting was widespread, common and represent what used to be the ordinary railroading life until automobiles wrecked the balance of forces. It may not be a real place, but the final goal is the same: running realistic trains in a realistic setting. The reason why I propose such a design is because going full prototype isn’t for everyone. And at some point, we all want to see progress and results. Part of the fun is the process; part of the fun is enjoying the damn thing. With this design, I try to merge an enjoyable small switching layout with continuous running and iconic “American railroad” vistas. Something that can be built in over a realistic span of time, at a reasonable cost, be fun for a solo operator of a bunch of friends and provide modelling opportunities over the years.

In term of operation and motive power, one could use 2-8-0, 2-8-2, 2-10-0 or even 0-8-0 (if replicating transfer runs). E-L Historical Society put together a very helpful roster of Erie steam locomotives that can help to narrow down suitable engines. Bachmann, BLI and Proto 2000 made good plastic models that could be improved and slightly bashed to better represents the prototype. Also, one could simply buy a prototypical brass engine and start from there. Since the locomotive budget won't be high, it could be a good idea. You will note these locomotives all have in common to be relatively small yet bulky enough to have that "big steam" look that we love so much. It makes them perfectly at home on a relatively small layout. As for the caboose, JLL Model's new owners retooled their original resin kits so they can be produced in plastic. Erie wood and welded Dunmore designs will then be available - they hope - by mid-2018. It is certainly welcomed, particularly since Erie was a very large railroad yet very few helpful models are available.

Another positive aspect of such a generic layout is that it can be easily set in another era or improved over time without having to trash everything. By the way, amateurs of big mainline could simply double track the mainline and keep everything else. As for motive power, what suits your need will do the job since this isn’t a particular division with specific restrictions. Using common sense and personal interests  should yield good results.

Some people expressed concerns about staging. I generally believe staging to be overrated while operating switching layouts. The reason is that there is very little interest in operating several trains on such a simple track arrangement before it looks like a cumbersome gimmick. Given the goal is to operate one train in one town, it is thus superfluous and a waste of time and resources.

That said, I updated the plan to see what could be done if one still wanted stating. I opted to not include more turnout on the layout, thus the staging area is located outside the room and take advantage of the junction, making it a real working wye, which makes it possible to remove the turntable. However, you will quickly find out using the wye would require to go outside the room. Worst, when the liftout section is in place, going to the staging area will be a real issue. Thus, I believe you will understand why I don't care about staging, particularly when "hidden". It's a good conceptual idea, but the most frustrating contraption on a layout. Keep things simple! 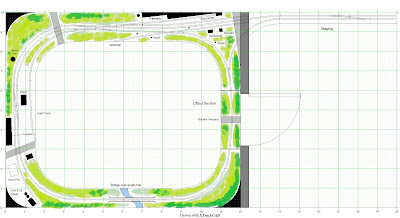 Posted by Matthieu Lachance at 4:45 PM