Analysis paralysis and perfectionism are serious diseases! I'm been afflicted with them since as long as I can remember when dealing with layouts. I can't even. While I've built several switching layouts to fill the void, I've not built something close to a functioning loop since two decades (except for the club layout). In the recent months, I've just decided move forward and cross the river when I'll reach it. The dream layout is a pipe dream... and at the end of the day, for me, it's not about a dream but simply running trains and rolling stock. The idea is to have a decently realistic canvas on which I will have the pleasure to recreate freight and passenger trains as I fancy. 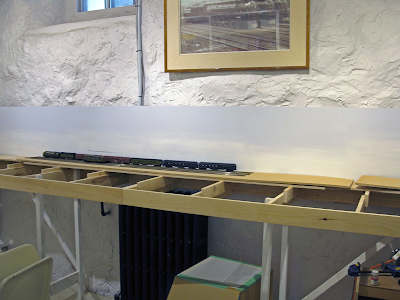 In that regard, the project I shared here in the past few months (if not years!) is rather simple: a single town on a main line. It's been on the back of my head for many years now. A generic Quebec South Shore layout with a generic scenery that can easily accommodate trains from the 1950s to the 2000s without having to change anything more than the depot and the vehicle. Based on CNR Monk Subdivision, but that can accept classic Canadian Pacific, Quebec Central, MMA, CMQ and even some Northern New England roads such as BAR, MEC and CVR. By keeping it mundane, I make sure I no longer need to waste time deciding which prototype I want to model (I have the club layout for that) but focus on trains themselves. Bear in mind it's not about trying to cram every railway fantasy I have on a plank of plywood, but rather creating a plausible frame that can accept most of my favourite aspects in this hobby. Instead of cramming a 150km long railway subdivision on a layout, I decided to recreate a glimpse of a 120km x 120km geographical area where several of my favourite railways operates in the same Appalachian environment. 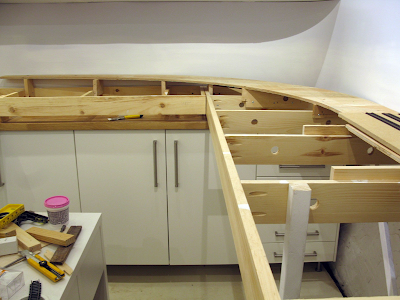 With that said, I'm glad to announce I've reached the stage where the layout is now starting to look like something. Today, the staging yard plywood was cut and installed, ready to receive the track and wiring in the very near future. I'm also eager to start working with splines for the first time of my life. To reach that point, I've changed my approach by applying the 80/20 rule. Generally, I would try to get everything perfect before moving to another step. While praise worthy in some circumstances, it leads to serious waste of time and even death of projects. At this point in my life, I know I have enough skills to make up for mistakes on the course of a project. Trying to be Leonardo Da Vinci to paint a vaguely impressionistic backdrop with latex paint is an exercise in futility. I did my best and identified a few spots that may need retouching later on when scenery will start to be applied.

I've also made bold choices with staging capacity. Instead of building a very complicated hidden staging yard, I decided to create a surround staging with only three tracks. These tracks are about 4" lower than the town scene which means I don't really have to bury them for invisibility sake. Takes a lot of stress out, make the project much easier to build and there is still a possibility for expansion if required.

As for the layout itself, after building the staging level, I staged a typical passenger train and was surprised how small it looked on the layout. Far to be a negative, this is a welcomed discovery since it means the layout will look larger than it is and will capture that feeling of open space I'm looking for. I have no idea how it will really look once done, but I can tell it will be a very, very low track density layout at this point.
Posted by Matthieu Lachance at 8:01 PM