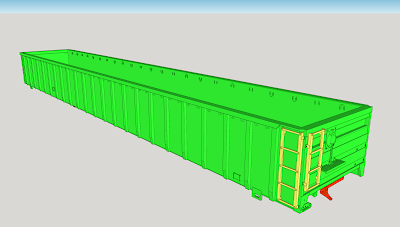 With the constant progress of 3D printing, I moved forward with another project of mine. Years ago, we added an aluminium cable manufacturer on our layout. This customer used to ship large coils on 65ft gondolas, most of them being CN series 156000. Unfortunately, no decent stand freight car exists in HO scale for these cars and the old Walthers model is both old, poorly detailed and not to my taste. 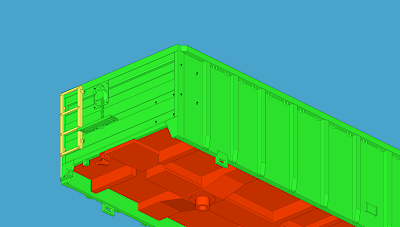 Taking advantage of my skills acquired when designing my woodchips gondolas (more on that later this summer), I took a few days to model a prototypical CN gondola in SketchUp. It went relatively straightforward and the prototype is ready for printing. 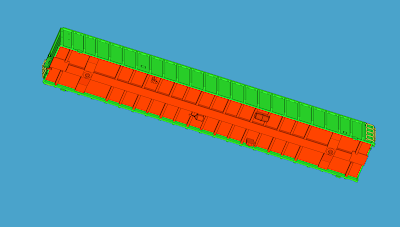 However, I made some alterations to make the model easier to print and assemble. First, it used to be a series of flat parts to assemble, but with improved capacity of 3D printers, it is no longer required. Ladders will be printed in place too. However, I removed the coupler boxes as I found out they can be relatively fragile in resin. The same with stirrups which are better when separately applied and fashioned in metal. Also, underframe members, which were initially I-shaped are now rectangular. They can't be seen under normal circumstances, they will be hidden by weight and they are hard to print and flimsy. I saw no need wasting time and effort rendering prototypically details that won't show. You must choose the hill on which you wanna die. 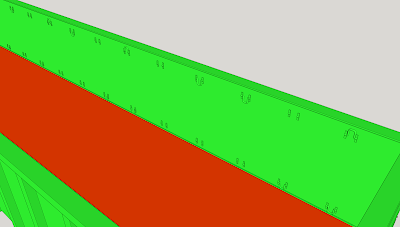 On the other hand, I felt compelled to add some neat details inside the gondola, like rings to secure loads. Using prototype pictures, I determined their location, but also how many were missing and their relative position (up or down). This is the kind of details that matter to me because they can be seen and tells a story.

The prototype will soon be printed to track down every mistakes that can be corrected. It will also be a good opportunity to make sure the car is fully NMRA compliant. As for weight, steel shots will be glued on the underframe, between the ribs.

Posted by Matthieu Lachance at 1:28 PM