The last big step in completing this project was painting the roof. As I mentioned before, I ran out of pearl gray shingles and had to use leftovers from other projects which were black and brown. From that point on, it was the point of no return.

Dark gray and light gray primers were used for the initial coating and provided a basic color. Unfortunately, this had the adverse effect of warping the cardboard underlay because it wasn't secure as well as thought. For a while, I thought the model was ruined, but after some thoughts, I used a hobby knife, lifted a few shingles in the worst spots and cut an opening into the cardboard underlay. 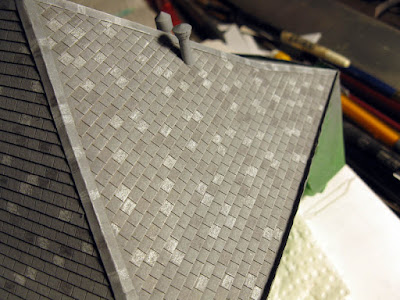 Canopy glue was then poured into the new rectangular holes. This shape was selected to help glue to flow under the underlay. Applying glue, then pumping it under the carboard was done by pressing it down several times. This motion created a suction effect making the glue flow under the underlay to increase the adhesion surface. When I determined a good amount of glue was in place, I pressed down in place the cardboard for a while for it to set in place. I made five of such holes and it saved the model. 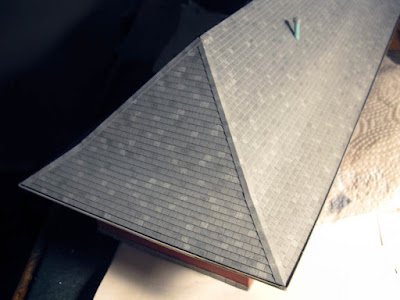 The next step was to create color variation on the shingles. The real Drummondville station is roofed with highly contrasting light gray shingles which I was eager to replicate. However, I was not in the mood to individually paint each one. Using color pencil, I applied various tones in a random pattern. It was time consuming, but color pencils produce a neat textured pattern instead of a solid color just like sanded elastomeric products. On the other hand, they can be quite garish and care is required to select good matching colors. 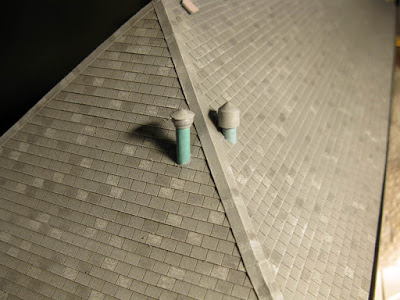 The light gray pencil was also use to add some highlight on top of the ridge caps. Then, I drybrushed a very light gray - almost off white - over every part of the roof to add relief to the shingles. It really made them pop up! 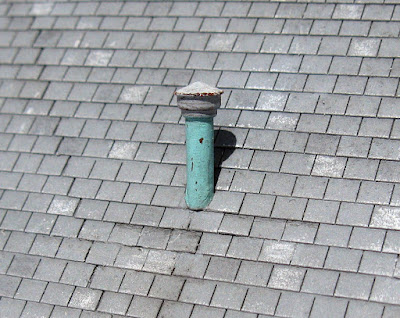 Then, I painted the vents with various bleached greens and metallic colors like the prototype. Though I model the station a few years after its restoration in the early 1990s, I felt making everything brand new and shiny would look toyish at best. With some modellers' license, I added scratches and rust sports to these elements so they could blend together with the finished model. 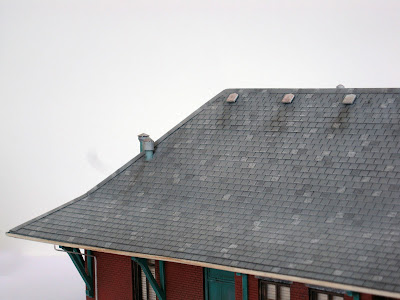 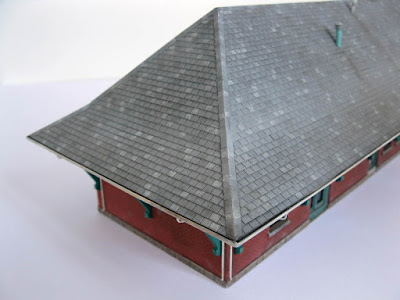 Finally, two coats of a very dark brown oil pain wash (black + burnt umber) were applied to the shingles. This step is crucial in adding shadows but also dirt to the roof. It's subtle streaking and pooling effects add depth and unify all the colors already in place. Once dry, I brushed some dark brown and black PanPastel near each vents to add streaking. These are quite subtle, but the break the roof surface uniformity and add a great deal of realism.

Posted by Matthieu Lachance at 6:10 PM