It's been about 2 years, maybe more, since the last big scenery work on the layout. It was the peninsula and involved doing rock faces and riprap. 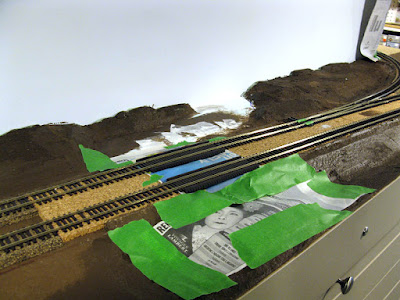 Now the new challenge is to scenic Maizerets between the staging area and D'Estimauville Avenue. The first step was to paint the track. A trusty can of Krylon Camouflage Brown did the job perfectly. Later, this brown coat of paint will be covered with different acrylic color variation to weather the ties. Rail side will be weathered with powders later on, after ballasting. 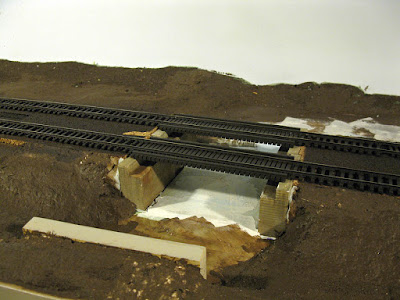 Cleaning the rail heads was done while paint was still fresh, yet, there's always a small paint film that stays on the metal. We used a block of MDF to clean that and make the rails shine. We found out it did a great job without scratching the metal. That's probably going to be a favorite method to use in the future. Unfortunately, we found out quickly Rapido's GMD1 have a different wheel geometry that pick up electricity from the side of the rail head. 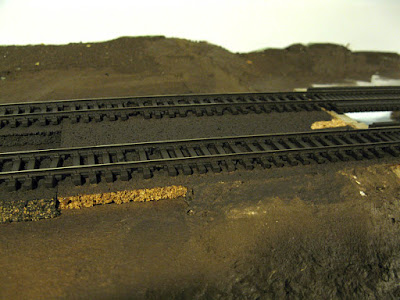 Both GMD1 didn't perform well over the painted track while other locomotives ran just fine. So we had to clean the rail head interior side again. It took us two hours, involving two people, to clean about 15 feet of double track. Not a funny experience. We felt like North Korean laborers sanding down welded joints on Pyongyang's tramway using emery pad! Seriously, they really did that about then years ago! 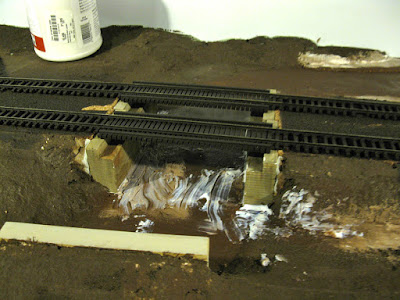 When cleaning was done, it was time to work on the river bed. First, cork roadbed strips were used to make sand embankments inside the meanders according to the prototype. Then, using acrylic caulk, I sealed every little cracks I could find in the roabed. That is necessary to ensure diluted PVA and other liquid scenic material won't find their way under the layout, on the carpet. The riverbed was then completely painted a dark brown to hide the styrofoam blue hue. 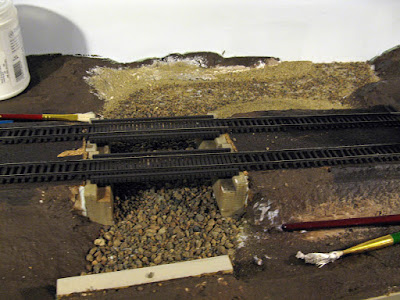 Next step was to pour sifted river pebbles. They are actually real pebbles from Malbaie River gathered near Clermont bridge. They have the correct shape and color for this application. In Maizerets, the river bottom is full of round stones, some emerging from the waters and smaller ones covered the embankment where ducks gather. 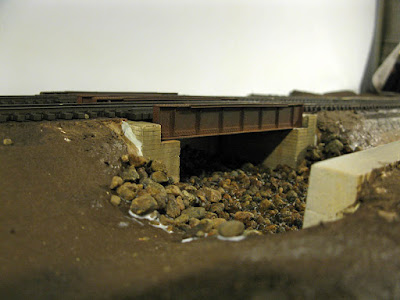 Pebbles were poured over a layer of PVA glue. When I was satisfied with the rock material appearance, I wetted the rocks and sand with isopropyl alcohol then covered everything with a generous coat of diluted PVA. 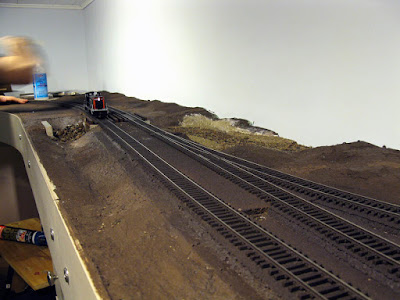 Bridge structures were put back in place and we resumed operations right after. 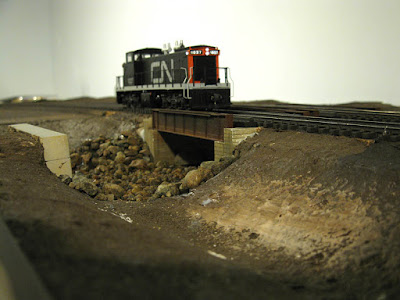 Posted by Matthieu Lachance at 9:10 AM