A New Switcher for Donohue

A few months ago, I acquired a brand new sound-equipped Atlas S2. This is a fine model, but we quickly shelved it when we found out the locomotive had serious electrical pick up problems. I means, it couldn't run more than 4 inches with losing power and sound restarted.


Since we are actually upgrading our locomotives roster, I asked Louis-Marie to check out if something was wrong with the engine and to repair it if possible. 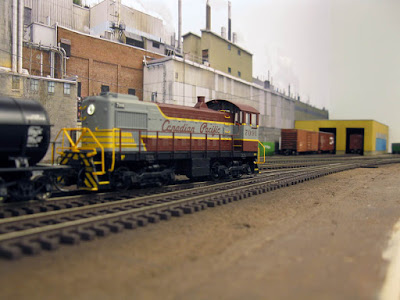 The repair was quite straight forward since there wasn't no mechanical problem. In fact, the locomotive was extremely dirty... Wheels, pickups, etc. everything was covered in dirt making the locomotive as unreliable as possible. After the cleanup, it ran just as expected from Atlas, crawling flawlessly at very low speed. This is definitely a great improvement over the original Atlas locomotive that was itself a pure gem to operate back then. 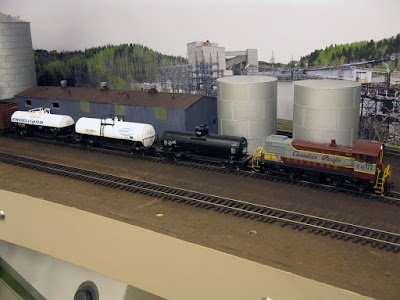 Now, I'm quite puzzled. The locomotive was brand-new when I bought it from a trusted seller I've known for year. The was no clue it was handled by other person than myself since it left the factory and I know it wasn't displayed in a shop or used as a demonstrator. On the other hand, the amount of dirt was spectacular for a brand new model...

Anyway, now locomotive CPR 7091 is now performing its duty at Donohue, replacing the venerable GE 44-ton now out of service. By pure coincidence, the model is exactly the same locomotive (model and roadnumber) that was sold by Merrilee to Donohue back in 1985. Unfortunately, I must admit I'm a little bit uneasy to repaint it and kitbash the cab to reflect modifications done by Merrilee prior to the sale.

Posted by Matthieu Lachance at 5:00 AM