Last club session was an occasion to improve some very little details.

One of them was adding a frame around the woodchip unloader foundation. This kind of building with large open bays are always at risk of warping and this one was no exception. I added everything I could inside to brace it correctly, but it was not enough. Some thing strips of 1/8" masonite were glued and nailed aroung the building perimeter. Later, this frame will be buried in scenery and not visible. At least, the building is now much more straight. 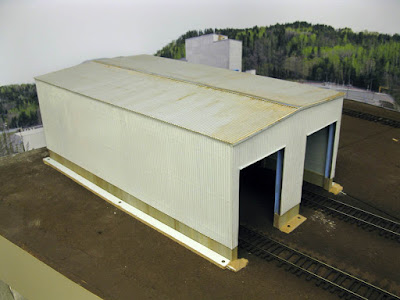 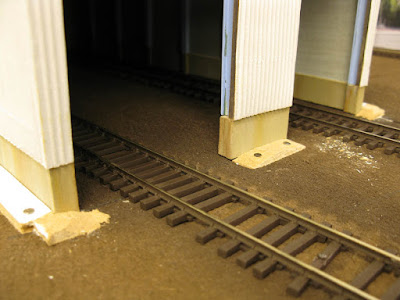 Another thing that was fixed up was Clermont's team track. I used to part away from the right of way with an angle. The initial thought behind it was to make it easier to unload for truck. However, it didn't look realistic and made scenery there a little bit awkward. On the prototype, this track is parallel to the small yard and nested against the hill. I think the new arrangement is much more pleasing and feel less contrived. The hill slope will be also less dramatic and caricatural. 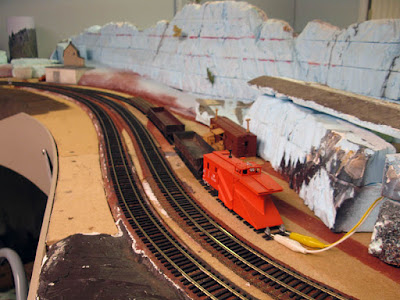 In D'Estimauville, we also talked about changing some track arrangement to better reflect our operation pattern and the prototype. Right now, we have a hidden staging area located on a reversing loop inside a closet. At first, it sound like a good idea. But in fact, you never what's staged, there's a risk of collision, getting there require to crawl under a duckunder and we never use the reversing loop. A little bit overkill. Worst, the rolling stock cabinet is located on the layout room, not inside the staging area... Not the greatest idea ever. 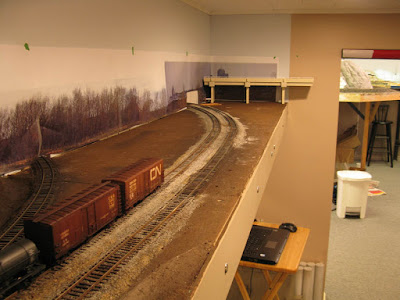 The original design called for all track to be visible on the layout with no reversing loop. The track would end at the wall, under a highway overpass. We had a discussion about it and it seems a logical decision that could be implemented in the future. To better follow the prototype, the loop diverging track would run parallell to the main track up to the overpass, just like the prototype. Having a storage siding would be much more useful than a reversing loop. 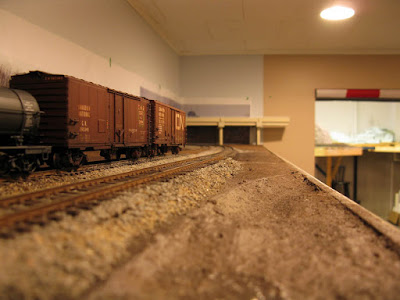 Finally, the last improvement was adding small metal card holders on the rolling stock cabinet. Each will be identified with a customer name to make staging and storing a little bit easier.

Posted by Matthieu Lachance at 5:00 AM