Work on my two MLW RS18 kitbashes has resumed. Lettering is underprocess and with the help of Louis-Marie, it was possible to install TCS keep alive KA2 in each loco. The model were running flawlessly, but since they will be the most important part of the fleet, it was wise to make them bullet proof.

To install the KA2, we had to find some spare room inside the shell. The only option was to remove some weight over the front truck. Never a great idea to remove weight on a locomotive, but it was a trade off between pulling power and reliability. Anyway, our consist are rarely over 12 cars and both RS18 will be permanently paired during operation. Removing some weight was a very easy task. In this hobby, most people would tell you how you need a Dremel or a milling machine to do that kind of stuff. But in fact, the task was far easier that I first thought. I tried with my Dremel but it was evident the result would take a lot of time and wouldn't be stellar. Thus, a good old metal saw was used instead. In less than 10 minutes, the weight was neatly reshaped and some filing ensured everything was square and neat. 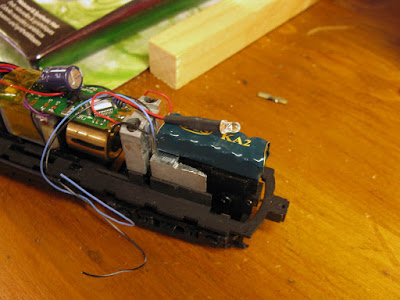 Now, the mechanical aspect of this project is done. It's only a matter of decalling, assembling and weathering... it's already under process!
Posted by Matthieu Lachance at 10:39 AM