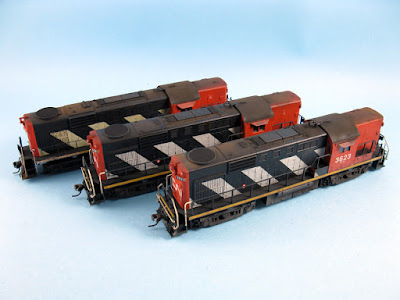 All good things must come to an end and I'm proud to say I finally can see the light at the end of the tunnel with this mad project. Weathering was the last step and I did it yesterday. It was quite a straightforward process and I surely di not try anything too much artsy. 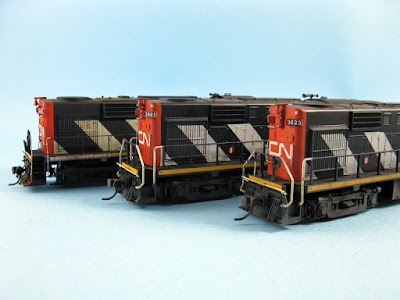 Since RS18 are the backbone of the fleet, I didn't want they to be garish rust buckets. Most pictures of the 1980s show them as well-maintained and rather clean locomotives except the proverbial ALCO sooth cavering every square inch of horizontal surface. Most typical wear was white paint peeling off on railings, dark streaks on the running board and some whitish dirt on the long hood on a few units. Trucks were generally clean and not too dusty (at least on pictures of engines assigned in Quebec then). 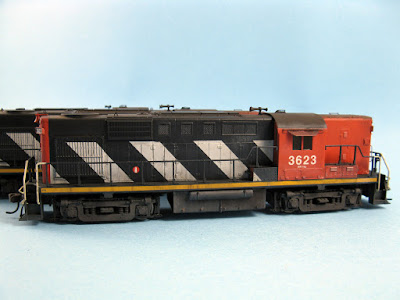 I believe a good weathering process is about reproducing what happens in real life. My first step was to fade the as if it was degraded by UV rays. A very diluted tan color wash was sprayed over the models until satisfaction. 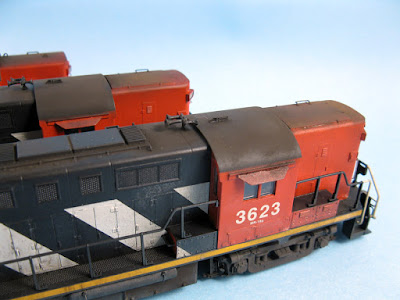 The second step was to build up the ALCO typical dirt on the roof. Working with prototype picture, I was able to find out the short orange hood roof was almost black and the sooth was running down along the vertical sides with rain. A wash of India ink/alcohol was used to mimick this effect realistically. Also, a very thin coat of this wash was sprayed all over the model to dull it a little bit just like the prototype. 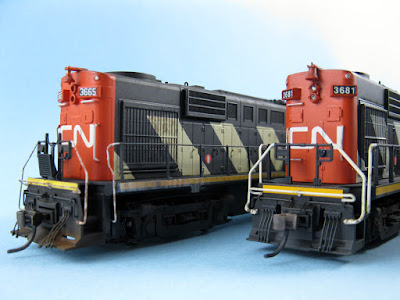 When dry, I used a special wash used by Warhammers' modellers called "Null Oil" to add som dirt in the long hood panel lines. It is a very potent stuff and I was careful enough to dilute it a little bit prior to use. It was particularly effective on louvers. Only unit 3623 got that wash over the orange paint. It almost ended up in disaster but I was able to save the day. 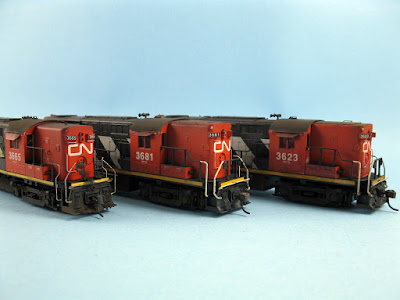 The next step was to use AIM weathering powder to give some texture to the roof, trucks, pilots and fuel tank. Prior to this, the trucks were sprayed with Krylon black and camouflage brown spray paint, giving them a nice warm black shade. 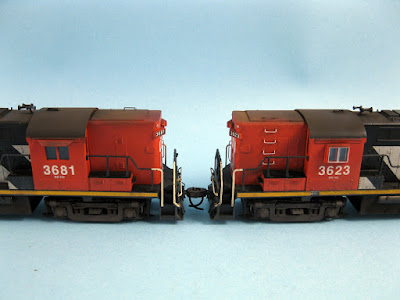 Finally, oil paint and odolourless solvent were used to add streaks to the running board. An easy job done following prototype. Each locomotive received different streak patterns and colors to make sure it was too uniform. 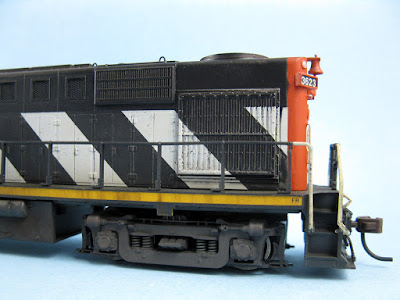 Unfortunately, at this point, I sealed my weathering job with dullcote. In a matter of second, all the textures were lost and the models looked almost brand new albeit with color variation effects. To counter this, I sprayed a new tan color wash over everything. The wash was very thin and thus didn't really affect the overall coloration. In fact, it helped to blend everything together. Finally, a last coat of weathering powder was added and I kept it as is. 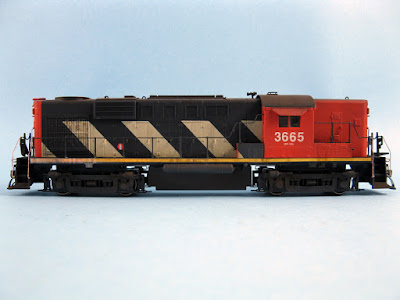 New headlight lenses for the Miniature by Eric castings (on Atlas locomotives) were done using Woodland Scenic Water Effects. A few weeks ago, I bought my first bottle of Micro Krystal Klear in a shop but quickly realized the seller sold me an old bottle. The content was like a marshmallow and couldn't be worked into a good shape. I've heard a lot of good comments about Micro Krystal Klear, but it seems I'll have to find a better supplier. 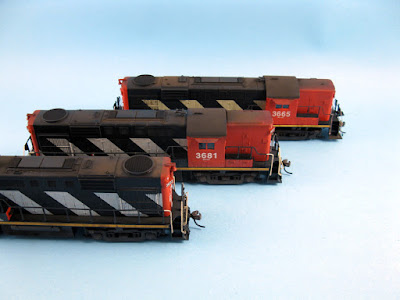 This anecdote just make me realized almost every time I got a truly defective product, it was when shopping directly in a brick and mortar shop... and often from well-established ones. What did I learned? Online or real, it's all the same. At least, when I shop online, I don't feel the seller's trying to force a product I don't need into my throat. I never loved that pressure they put on your shoulders, this angry attitude if you walk out of the shop without buying anything (been there, done that). I don't miss those annoying peddlers at all with their so-called experience and worthless opinions.

Hey! Enough ranting and enjoy the models!
Posted by Matthieu Lachance at 12:15 PM