At some point ,you ask yourself when it is right to stop adding details. Some people won't stop until they get a perfect reproduction of the prototype. While this may be tempting, it must be noted my little RS18 project is plagued with many inherent unprototypical features that would need a lot of time to make right. However, even if this is only a pair of locomotives for a layout mainly dedicated to operation, I feel there's thing you can't let go unchecked.

Diesel locomotives ends are probably the area we see the most on a model. You can't cut corner there. It's like painting a portrait and messing up the eyes... 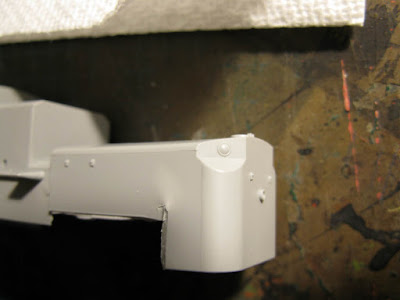 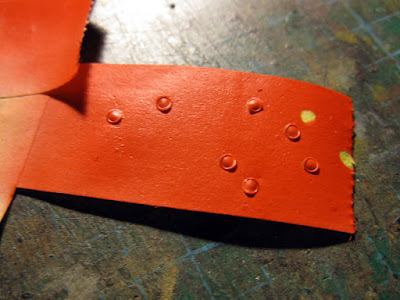 My first idea was to simply drill holes and add MV clear lenses. While the idea was interesting, I don't have enough MV lenses on hand and the classification lights wouldn't had their characteristic steel rim. 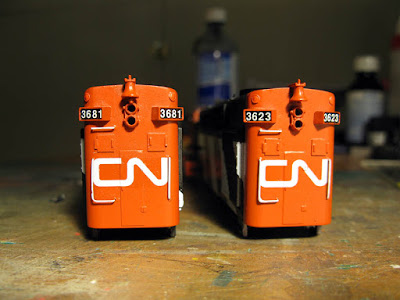 The other option which I implemented was to scrap off details from discarded Atlas shells. It was surprisingly easy and after a coat of paint, it looked just like the real thing. The lights were then glued directly on the model. The mess was minimal and as you can see, orange paint touch ups are going to be minimal. Next step will be to add a touch of aluminium paint over the lenses. According to prototype pictures, the lights were very dirty in the mid-1980s.
Posted by Matthieu Lachance at 1:40 PM