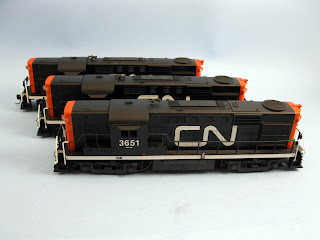 I'm glad to report the three CN MLW RS-18 are now completely painted and ready to visit the weathering shop. My goal was to build and complete the engines by the end of my 2-week Christmas vacations and the deadline was met. The funny thing is that I worked probably more on this project than I would at my regular job! That's model railroading in a nutshell isn't it? 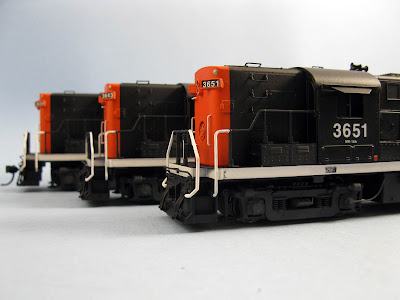 Among the invisible things I did was to swap one of the Kato drive for the other Atlas Classic drive I had. Certainly the Kato drive must be regarded as a marvel of ingenery for it's time, however, since the 3 locomotives will be often consisted together, I favorised a single drive model for all them all. The Kato drive will be used to power the fourth green & gold unit actually under construction. I found out the Mehano shell was easier to fit over that drive that the newer Atlas Classic one. 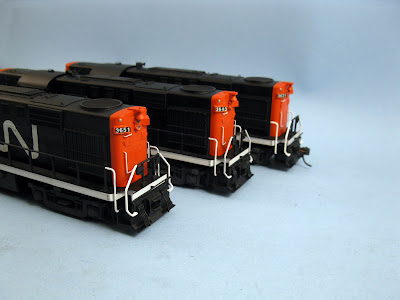 For the weathering, my intention is to have two locomotives with a moderate amount of weathering while the third one will be much more abused. Prototype pictures from the 1970s will be used as reference.
Posted by Matthieu Lachance at 2:55 PM