Among our many ongoing projects is the creation of a working and efficient system of grade crossing signals. This is no easy task and it required quite a deal of programming since out track arrangement doesn’t fit a typical situation. So far, all this behind the scene stuff including the sound is now almost done and we are working to build realistic grade crossing signals.

Our first experiment earlier last year proved us building signals from from scratch using LED and brass tubing and wire was not as intimidating we once thought. Knowing this, Louis-Marie worked actively in developing a method of building them with template and jigs to speed up the process and control the quality. So far, his efforts yielded impressive results and if it weren’t for the LED size, they are quite close to prototype if not better than commercial products available.

However, the interesting aspect of this project isn’t exactly the physical product but rather the fact that Louis-Marie, like many other modellers, considered himself as unsuited to precise scale modelling. As you can see from the picture shared here, he certainly did develop impressive skill and found out he was proficient at something that supposedly was out of touch. Bear in mind these signals are his first attempts at scratchbuilding with brass! Another proof you can’t fear doing something until you try it once. Louis-Marie being extremely methodical compared to my messy approach to the hobby, helped him to produce state of the art models. And, for once, he was much more demanding than me about prototypicalness.

I’d like to share a few techniques and tricks Louis-Marie used to make his signals:
All the LEDs were soldered using a special MDF template made to prototypical dimensions. Not only it speeds the process, but it ensures every pair of lights is correctly spaced. It was also useful in keeping front and rear pairs of LEDs very close. 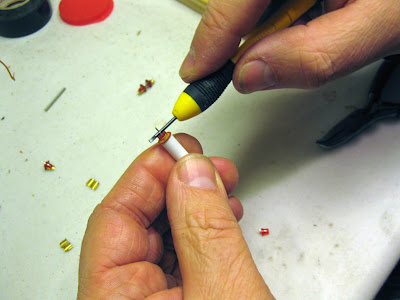 Another interesting idea was how he made the signal targets. The target themselves are made out of HO scale Kadee truck washers. They have the correct outside diameter and their center hole fits perfectly common small LEDs. The LED base rim supports the washer. The visors are made of a brass tube cut in half. They are then cut to length and rounded with a Dremel tool. They are pre-colored and inserted on top of the LED. With a small plier, a light pressure makes sure they fit perfectly around the LED, keeping them in place when the washer is put in place.

When assembled, other small cosmetic details like bells, electric boxes, crossbucks and bases will be added. Some parts have been salvaged from old Bachmann signals and were filed down to make their dimension more prototypical.

And now I know I’ll have to start seriously building some roads!

Posted by Matthieu Lachance at 5:47 PM